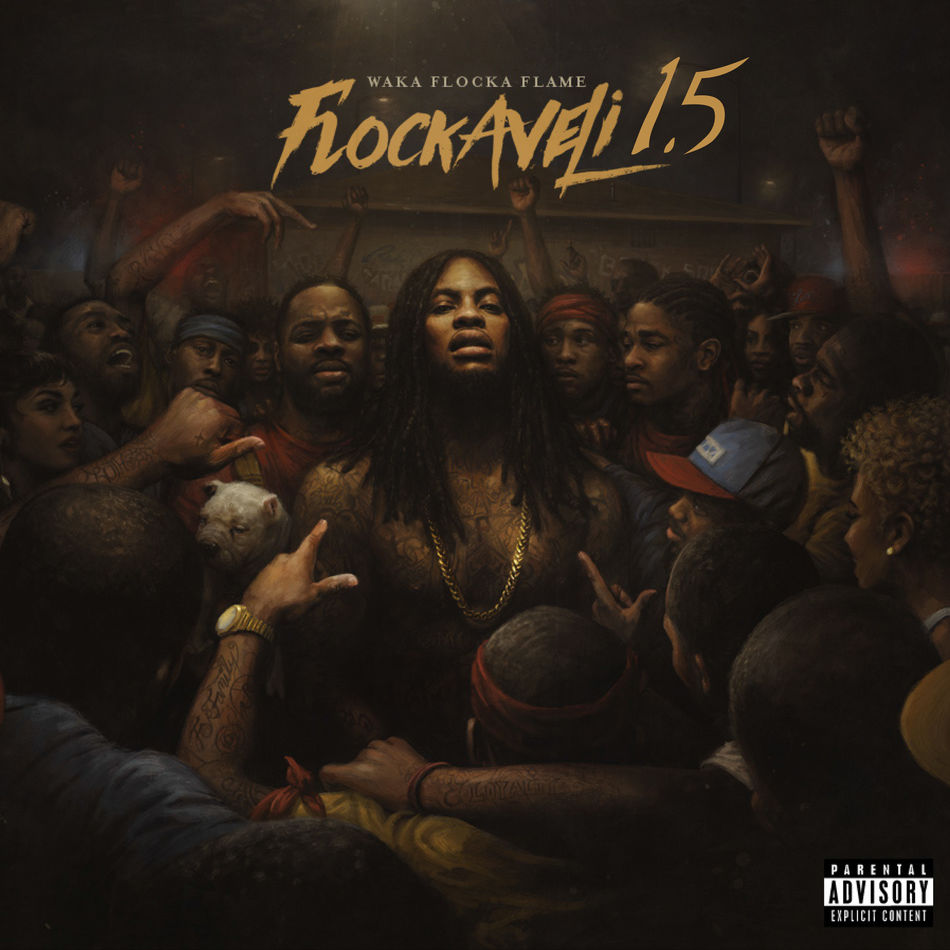 When Waka Flock Flame splashed onto the scene back in 2009, there were obviously mixed reviews. Some praised him for his ability to make clear cut hood anthems while others thought it was blasphemous for him to be called “Hip Hop.” “Oh Let’s Do It,” which dropped in 2009 was his formal introduction to the semi-mainstream. It wasn’t until 2010’s “Hard in the Paint” where things started to really take off for the NYC born, Atlanta-bred rapper.

Fast forward almost six years, two solo albums and 22 mixtapes later and we have yet another piece of new music from Waka. This time, it is in the form of a mixtape entitled Flockaveli 1.5.

Something that has both helped and hindered Waka’s career thus far is his unpredictability. One second he is “hanging in the Dale with them hit squad killers” and next he is advocating on behalf of the PETA. This is even realer with his musical catalog. One month we get the EDM-driven mixtape Turn Up Godz Tour, just to then receive the complete opposite the next month with gangster gospel Salute Me or Shoot Me 5. It’s safe to say that Flocka is one of our culture’s biggest wild cards.

On Flockaveli 1.5 however, he is the furthest thing from unpredictable. We get exactly what you would imagine; an aggressive, trap heavy follow up to his moderately acclaimed Flockaveli LP. When you play all 15 songs of this mixtape from front to back, it is actually fairly tough to distinguish which song is which. Many of the songs sound so intensely similar that at times it feels like you are listening to one long 51-minute song.

For example, “Lose My Mind” and “No Lie” pretty much carry the exact same beat, tempo and build with the latter having less autotune. There is no real variance in subject matter, instrumentation or even tone on any of the tracks. As unusual as this may sound, his traditional Richter scale breaking energy level renders this tape monotone. He gives the exact same delivery song after song after song. There is an added sense of production and effort on “Birthday,” which may find its way onto a few turn-up playlists, but even then the song’s creativity falls incredibly flat.

In all honesty, it isn’t his verses that cripple this tape because, believe it or not, Flocka actually flexes a few decent flows throughout. He is able to break down some relevant multis and somewhat continues the transparent trap lord narrative he started on Flockaveli. The beats somewhat impede its listenability, as Southside, TM88 and Metro Boomin all provide instrumentals that aren’t on par with some of their previous work. But the real issue with Flockveli 1.5 is the songwriting. Nothing comes close to standing out and the choruses sound like they were copied and pasted from song to song with some minor word changes.

The mind-numbing trap humdrum comes to an end on the tape’s very last track entitled “How It Feel”. Producer Black Metaphor finally gives the project some variance in sound, feel and emotion. Instead of the same old party trapper Waka, we get insightful Waka – well, as insightful as Waka wants to be. The track has a much better chorus that is complimented with a soulful sample mixed with trap claps and drums. Waka goes into vivid detail about the struggles of coming up, his feelings about family and even his relationship with Gucci Mane. It is by far the strongest track on the mixtape and sheds some light on what Flocka can do if he uses the right tools. By no means is an introspective Waka project on the way, nor should it ever be, but it is clear that Flocka has the ability to make quality rap music that doesn’t sound like it was made for the Grand Theft Auto 5 soundtrack.

At last, Flockaveli 1.5 doesn’t do much for Waka in the grand scheme of things. Other than the shimmer of wisdom at the end, the tape really doesn’t provide anything impressive. If anything, it serves as an uneventful pit stop before Flockaveli 2 drops in early 2016.