G Huff - Royalty For A Lifetime 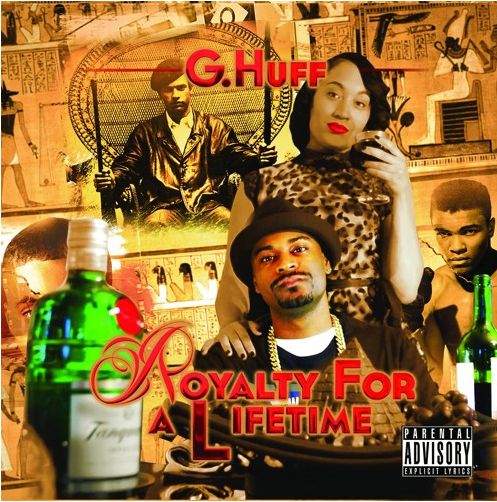 Youngstown, Ohio isn’t known for having a rap scene such as close brother cities in Cleveland or even Columbus. However, that hasn’t stopped G. Huff from getting much respect as a former Sway In The Morning “Get In The Game” artist among notable coverage from The Source and Okayplayer. Working with frequent collaborator Vice Souletric, he dropped the fairly solid Where Do We Go From Here? featuring some notable guest appearances from East Coast Hip Hop notables Guilty Simpson and Reks in 2011. Over the years, the two would release a few releases together in Are We There Yet? alongside Twisted Up with Philly emcee Baby Black. Some time later, Huff’s 2013 solo project Vacant Thoughts went largely unnoticed. Before 2015 creeps closer to an end, he lets a loose Royalty For A Lifetime. Those familiar enough with the emcee’s career understand his abilities including adequate beat selection and everyman lyricism reflecting his very Midwest lifestyle. Though some may be turned off by the album’s middle-of-the-road approach, Huff does a pretty good job holding everything together.

It wouldn’t be a G Huff album without Souletric and thankfully, he handles some of Royalty For A Lifetime’s greatest productions. Following the Soundbox produced opener “Huff Almight,” the duo provides the album’s first magical moment in “I Need Work.” Equal parts aspirational working man anthem and resume, Huff spits his testimony with surprising sincerity: “Logan Avenue 2124 was my mom’s house / Lil nigga took the wrong route / Army kicked me out I relocated down south / couple g’s in my pocket, dreams of making big / one bedroom apartment, baby momma and kids.” That continues other collaborative tracks with Souletric including “Tears in A Bucket” featuring Alison Carney and J Tronius along with the Nore assisted “Lucky Ain’t You.” There’s a slight mishap earlier on as Ransom’s guest verse on “Do It to You” can’t help its awkward hook.

Without his longtime collaborator, Huff still handles himself well. Coming from his Chapter 330 loosie series last year, “Cash Rule” fits within the themes of Royalty For A Lifetime. Using interpolations of Wu-Tang’s classic “C.R.E.A.M.” was risky, but he makes it his own. The same goes for the album’s most brutally honest track “Savage.” M.O.E. Beats’ hard drums allows Huff to spit his own self-doubt and hopelessness: “The sun don’t shine nigga stuck in the rain / just want to get in the game to buy me a chain / baby momma left me for another nigga that’s lame / now she got a kid with him and my son gotta live with him / I hate that nigga but still gotta deal with him / trying to keep the peace because if I don’t, I’mma reach for heat pistol whip him and knock out his teeth.” Despite the darker lyrics mentioned, Hi-Tek provides Royalty For A Lifetime’s easiest moment on album closer “Be Easy” featuring Souletric.

Probably set to become the year’s most under-the-radar albums, Royalty For A Lifetime is full of rhymes for everyday people with everyday realities. Huff keeps things very simple and makes the most out of the beats provided like the philosophies the album represents. Years removed from the game, Huff makes Royalty For A Lifetime a well-rounded project full of various human emotions.