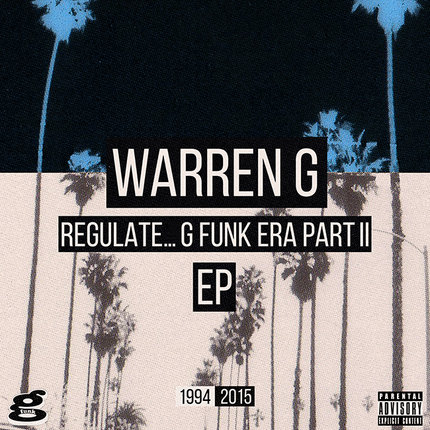 In a year where Warren G’s step-brother Dr. Dre has resurrected old school g-funk vibes via new album Compton: The Soundtrack and N.W.A. biopic Straight Outta Compton, it’s only fair that Long Beach’s finest also releases his new EP Regulate: The G Funk Era Part II. Intriguingly, it’s on Warren G’s first longer-form release in six years that the G Child sounds closest in style and execution to the major hitmaker famous for 1994’s single “Regulate.” Studio technology also resurrects the voice of Warren’s legendary vocalist collaborator Nate Dogg for the new tunes, which adds considerably to the release. Blend that with the still present top skills of guest rappers E-40, Bun B, Jeezy and Too Short and this EP provides a perfect modern snippet in maintaining the mood of falling in love with West Coast rap all over again.

Part of this Regulate Part II’s success is the existence of Nate Dogg unreleased acapellas. Nate’s voice is actually so iconic and missed. So much that in fact, Warren G’s masterful production work in flipping Rhythm Control’s Chicago house classic “My House” for the EP’s similarly titled first track could slip by unnoticed. For some, Chuck Roberts announcing that “you may be black, you may be white, you may be Jew, you may be Gentile” at the start of the 1987 released house hit is the most well-known voice in music history. For others, Nate’s “my my my my” in the hook of the 2015 version is welcoming their most favorite West Coast vocalist into the conversation.

Warren G never reached the lyrical heights of his best friend Snoop Dogg. However, he’s certainly one helluva storyteller. There’s something in Warren just proclaiming his rightful ownership of everything he possesses in “My House” that carries the physical and emotional gravitas of the acquisition process of said possessions. Also, Warren talking about being caught up in a dangerous situation with an unsavory woman on “Dead Wrong” carries the same trauma. Being 44-years-old now instead of 24 when his career started, Warren’s apparent weariness makes the story in the song feel somehow commonplace and thus, human.

“All they want is sex, trees and ecstasy” says Warren on Compton-meets-Oakland track “Saturday,” which features both Too Short and E-40. E-40’s still kicking his own very unique rap slang as he talks about “poppin’ ism and talking to a broad in a Geo Prism.” Meanwhile Short Dog still has “VIP hoes in his stable.” Warren is still kicking hellafied gangsta game as well giving listeners pauses and thoughts of time travelled back to 1994. But, it’s definitely 2015, and absolute proof that you’re nodding your head to the funky, bass-driven groove. Further proving  that great left-coast rap never sounds dated. In fact, it’s timeless.

The other single worthy of significant mainstream consideration on the EP is “Keep On Hustlin’.” One can only wonder what Warren G was going to do with Nate Dogg’s masterful interpretation of UK pioneers Soul II Soul’s 1990 crossover pop/house hit “Keep On Movin’.” The production features a sumptuous bass guitar, major key piano stabs and a chunky break, which gives it a feel akin to a g-funk take on Prodigy’s 2000 New York hit “Keep It Thoro.”

Houston hustler Bun B, ATL snowman Jeezy and Warren G spit bars that feel as though they still apply to the streets of their aforementioned hometowns. On one level, this gives the track a sense of gravitas because, heck, it’s 20 years later and three great rappers are still sadly spitting gangsta bars. However, just listen to how in the pocket Bun B is on a Warren G production and it just makes you consider what UGK and what was to be Detox-era Dre could’ve cooked up together. “Cali Trill” could’ve totally been an amazing thing.
For 15 minutes worth of music, Warren G’s latest EP gives you just enough of what you needed, along with the incredible added bonus of Nate Dogg and four vaunted veteran emcees included. The release not being long enough to potentially get as long in the tooth as the roughly 25 years of living rap experience represented on the album is actually to its benefit. Take solace in the fact that Warren G and others from rap’s most classic era are still great producers and vibrant storytellers. All at the same time as Dr. Dre and his friends once again take over the universe, a quarter-hour of music hits the spot.