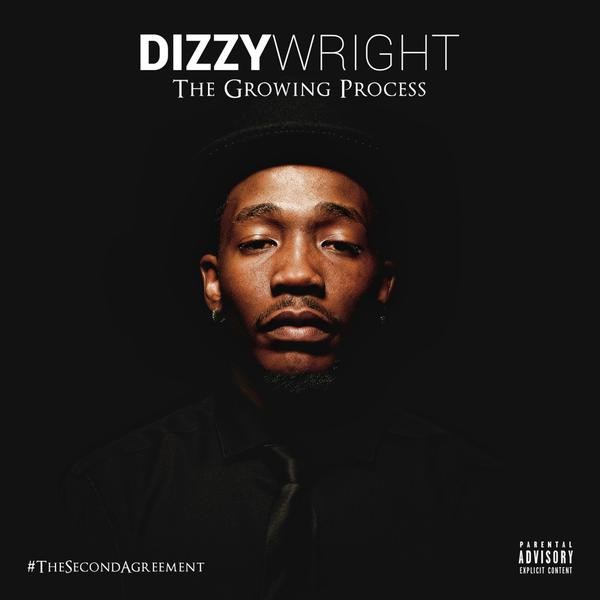 While other indie imprints like Strange Music have set the precedent of attaining both critical acclaim and commercial strides, Funk Volume’s steady rise marches on. Though commonly associated with the label’s eccentric flagship troublemaker Hopsin, Dizzy Wright has forged his own worthy path. Out on his own since age 17, the Las Vegas native has been left with no choice but to pave his own lane through music and more importantly life as a whole. Using the digital turf to his advantage, Dizzy has built a small army of loyalists. His following was so dedicated, it helped him land a spot on XXL’s annually cherished Freshmen list in 2013. After a successful string of well-regarded EPs and mixtapes, Dizzy readies his sophomore LP The Growing Process. The end result is a project that serves as a reflection of humanity that shines alongside various vices.

Immediately setting himself apart from the fray, Dizzy Wright has a standoff with his fans on album opener “Higher Learning.”  Taking feedback to heart, he arrives at a stark realization: “My life ain’t been the same while on a run/when this kid said ‘Fuck a message, we just wanna have fun.” Doubling down on this epiphany, he concludes a sense of betrayal saying “I looked at my YouTube views and I got salty, cause I realize my real shit don’t get that much love.” Most of The Growing Process is spent bravely tackling this very dilemma, one most of his peers may not bother to face at all, let alone on their songs.

The truth stands as Dizzy Wright is caught somewhere between turning up and conscious elevation, a trait once embodied by his role model Tupac Shakur. Torn creatively, he refuses to choose one lane exclusively over the other. Using the resources at his disposal wisely, his collaborations are organic and never forced as he shares introspective common ground with Big K.R.I.T. and Tech N9ne on “God Bless America.” Continuing along this progressive bent, the higher-minded “Can I Feel This Way” places Dizzy’s greater mission into perspective as he says “I honestly don’t want you to be like me, I want to inspire you to go and be yourself.”  Likewise, with “No Time Is Better” he explains that the key to maintaining his composure has been the ability to build his sense of spirituality up. Dedicating the early portion of the project to ideas like self-awareness and seizing the moment, his intent here is to help listeners take life by the horns.

Paying it forward towards those who inspire his thoughtful escapism, The Growing Process Dizzy Wright features two members of the legendary quintet Bone Thugs-n-Harmony. “Regardless” has Layzie Bone’s modern day spin on their melodic tongue twisting flows, while “Don’t Ever Forget” is stoner’s anthem that bridges the generation gap with Krayzie Bone. Along this vein, “Smoke You Out” and “I Can Tell You Need It” cover Hip Hop botany from various perspectives, while “Floyd Money Mayweather” is a catchy comparison to boxing’s most swagger driven fighter. Balancing these carefree moments with a dose of reality, “Daddy Daughter Relationship” explores how fatherhood has forced him to go hard at pursuing success within music.

Dizzy Wright’s strength lies in the desire to reach both matured and comparably younger minds, all the while effectively navigating both worlds. Though The Growing Process starts with forward-thinking ideas like “No I’m not here to brag about my salary/I’m here to change your mentality” on “Train Your Mind,”he rarely neglects the need to kick back and relax. For the first time having full control over his vision, he has become a hero by refusing to limit himself to one style. Still figuring out his way with each release, Dizzy has proven to be well on his way here.