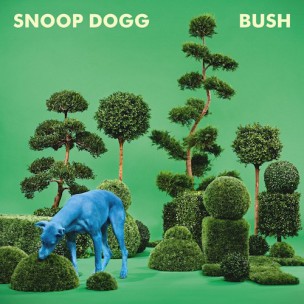 The content on Bush pins its attention south of the border from that tree, a groovy funk-ridden ode to summer hook ups. What at first seemed like an odd pairing between Snoop and The Neptunes resulted in a freshly rejuvenated career for Snoop in the 2000s; the collaboration yielding some of his strongest material like Tha Blue Carpet Treatment and Paid Tha Cost To Be Tha Boss in just a four year span. Snoop, being a founding member of the G-Funk movement of the 90’s and a devout student of the Parliament/Funkadelic school of groove, combined with Pharrell’s latest trending toward nostalgic Funk-Pop and their award-winning chemistry together, Bush reads like a musical blessing on a paper. But Snoop’s seasonal ode to DTF sensibilities is mostly marred in an overdone formula that produces sporadic results.

The undercurrent of Bush reinforces a popular yet largely erroneous assumption that many of Snoop’s albums are always good for a few catchy singles, but heavy on filler. Most of the album’s material sounds as if it was recorded in one fleeting jam session, songs repeatedly blending in with each other with little adherence to replay value. Of course, the presence of Snoop, Pharrell’s melodic crooning and Stevie Wonder’s sparse harmonica on the Innervisions-inspired opener “California Roll” is a crowd pleaser; the sound of warm West Coast nights set to wax. “R U A Freak” is another early winner, combining Snoop’s pimp sentiments with his newfound penchant for grown and sexy harmonizing.

But it doesn’t take long for the uniformity of Bush to rear its repetitive head. For the duration of his career, Pharrell has been much too swift on his toes to get caught up in ephemeral tastes — an artist who transcends trends and inevitably inspires poor man’s imitators in droves, such as his work on Rhythm & Gangsta. But for the majority of Bush, Pharrell seems to become trapped in a sonic one-track-mind. Many of the instrumentals sound quite like  B-sides to tracks like “Get Lucky” and “Lose Yourself To Dance” with neither the masked or unmasked Daft Punk in attendance. Coupled with Snoop’s party-and-fuck-centric content, many of the tracks inevitably bleed together.

Bush is clearly meant to be a party record, and along that vein, Snoop sometimes acts as the plus one rather than the main attraction. Some of his greatest work to date such as “Ain’t No Fun” and “Bitch Please” came about through a selfless philosophy, the rhythms themselves on Bush such as his on “Run Away,” featuring Gwen Stefani, both elect for minimal mic time to allow the instrumental to take center stage. What results is aimless, nursery harmonizing on rehashed production. Conversely, sometimes there is too much Snoop for his intended purpose. “I Knew That” rings as the premature lovechild of “Let’s Get Blown” and “Sexual Eruption” without the rarefied air of an instant club smash.

His legend solidified tenfold, Snoop has not survived this long off personality alone. Even his most lackluster projects contain gems, and “Peaches N Cream” is one of them. Snoop and Charlie Wilson play off each other’s energy, and the instantly catchy nature of the track justifies the notion that the diminished returns of Bush are the result of an excellent dream deferred by poor execution. The album concludes with the more Hip Hop oriented “I’m Ya Dogg,” complete with an enthusiastic Kendrick Lamar verse that gains the album some last minute momentum. Aside from “Run Away,” none of the tracks on Bush are utter drag-and-recycle-bin drop material, the album is a surprising letdown from two legendary artists who have (literally) a platinum track record.