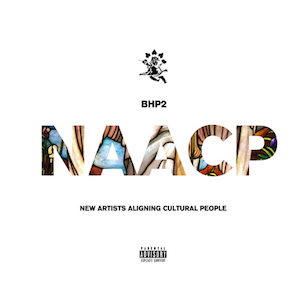 There are only a handful of artists brave enough to really explore themes that don’t crash right above the surface talk of Trap houses, jewelry, popping molly, and the endless supply of generic rapper-isms. When artists do branch out, it is usually vaguery clutching tight to buzzwords like “relevant” and “accessible.” Without even a studio album to his credit, Cyhi’s Black Hystori Project managed to probe deeply into anecdotes of black degradation, excellence as well opulence. Inspired by his nephew to create something that would be poignant enough to get him mentioned during Black History Month, Cyhi crafted a mixtape that quickly lit the internet on fire and kept it ablaze. His sequel, Black Hystori Project 2: NAACP follows in the same vein in both quality and substance.

Rather than revisiting previously tread tropes, Cyhi focuses most of his attention on contemporary issues facing the Black community — young adults in particular. The tape commences with Cyhi’s trademark oratory skills on “Intro,” hoarse vocals propelled by lofty ideals. He then flips one of Percy Miller’s classic lines for “Master P,” using the No Limit financial mastermind as a metaphor for his own rise to prominence. Against the backdrop of grim accounts of the many inroads to a life of subordination presented to him, the track is a celebration of perseverance. Instead of affirming the tired route of self-praise for the sole purpose of igniting jealousy, Cyhi’s overwhelming creative impetus is to inspire.

Cyhi’s true aptitude lies in how he delivers his message, inflecting reverberations in his speeches. More times than not artists get themselves into trouble by waxing poetic on worldly issues without a real dog in the fight, leading to dogmatic lectures that are equal parts artificial and boring. But Cyhi’s disposition is delivered by way of the streets, and his criticisms of the Black community consistently ring as true even when they are difficult to concede to. “Weak People” begins with a fiery sermon from Atlanta’s own Reverend James Manning, leading to some of the most impassioned words of the artist’s career thus far: “My partner shot a 100 niggas and it was never proven / We just labeled him a gangster and kept it moving / Let me give you the same outcome, separate shooting / A white man kill a black we holla persecution.”

As is custom in Hip Hop, Cyhi dedicates much of the tape’s content to the opposite sex, but at every turn he flips tradition on its head. “One Woman Man,” as its name implies, is a 180 maneuver away from the usual side chick ode, but in a rare instance, the sentiment outlives the actual quality of the music itself. “TV” is more a testament to the enjoyments of sex, together FR23SH PREAUXDEUCE and Tec Beats craft a melodic beat steeped in early 90’s R&B that exemplifies Cyhi’s breadth as an artist. He consistently represents himself as a pure Hip Hop archetype, even when he is lamenting the many problems with the genre.

While his criticisms are much more biting this time, Cyhi makes it evident that his main goal is to destroy and rebuild. A part of that process is cutting the fat, and on “To Be Real,” the rapper speaks in candid terms about his myriad problems with what he calls “fake folks.” Critiquing other rappers for not adhering to codes of “realness” is nothing new, but Cyhi takes it a step further by explaining that emcees should fully represent themselves accurately rather than engaging in meaningless hyperbole. Regardless of the fact that not too many Hip Hop artists are able to achieve a high threshold of success without donning superficial airs, Cyhi constantly reminds us that he is an artist more concerned with genuine expression rather than mainstream appeal.