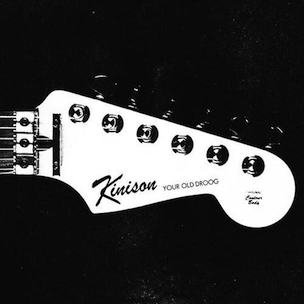 Proof of the adage “luck is what happens when preparation meets opportunity,” timing was amongst the key factors assuring Your Old Droog’s 2014 viral success. In a day where every armchair A&R, aspiring gatekeeper and quasi-tastemaker subsists off of spotlighting the next hopeful sensation, Droog gained traction from what was in retrospect a hokey conspiracy theory. The release of his self-titled EP on popular streaming portals including Audiomack and SoundCloud kicked off mass hysteria, as a tonal similarity to one Nasir Jones immediately forced him ahead of competition grinding far in advance. Rather than balk at claims he isn’t completely original, a piece in The New Yorker found him readily embracing the hoopla’s comparison, stating “This is like my street team, why would I stop free publicity?”

A fresh face amongst the throng of emcees facing unyielding pressure to resurrect the East coast’s nostalgic golden age, Your Old Droog throws an experimental curveball with the rock & roll inspired Kinison. Sticking to the no frills essence of his initial arrival, Droog’s masterful control over mystique allows him to appear without much prior notice or big rollout plans. Cosigned by respected cultural influencers including Rap scribe elite Sacha Jenkins, Your Old Droog has stirred up the interest of industry executives including Shady head honcho Paul Rosenberg and TDE president Punch. What they likely see in him is marketability and the self-sustained drive to create a spectacle that’s familiar while distinguishable as unique content.

As the hype machine has approached overdrive, interest levels have peaked with most definitive stances in support of Your Old Droog’s good intentions. Functioning best as a suitable winter soundtrack, Kinison reflects not only the grittier side of New York living, but the well documented melting pot of musical influences in the 1980s downtown scene. Practically an anomaly considering most Hip Hop fetishists in his peer group live and breathe the past 25 years of history, here Droog runs the risk of further painting himself into a corner. The brooding, bass heavy “Blood” obscurely references school pioneer Busy Bee and Bloodshed from Children Of The Corn (a former super group featuring Ma$e, Cam’Ron and Big L), as the newcomer places emphasis on revivalism. While this routine has garnered acclaim for the likes of Joey Bada$$ and Action Bronson, Your Old Droog largely gets by on the merits of his delivery, giving the bare minimum as his actual wordplay is concerned.

Though a logically swift effort is made to capitalize off of Your Old Droog’s buzz, with Kinison he mostly strings words together saying whatever tickles his fancy.  Borrowing a newly popularized gun talk style from the likes of battle Rap’s Hollow Da Don and T-Rex, Droog breaks down his simplified methodology with “Dumb down every lyric, I’m adapting/So it could bump in these hoods that even Eric would get clapped in (Clapton).” Relying far too heavily on these sort of schemes, he pushes rock phrasings past the brink of exhaustion with attempts including “Hit my boo up, like ‘When we linkin’ in the park’?” Occasionally capable of clever wordplay such as “I’m your hero/With ill freestyles since AOL free trials and NetZero,” mediocrity takes the lead with bars not limited to “Your hooks are straight Meredith Brooks/You’re a bitch and a lover.” While Canibus and others ruled the late ‘90s with the once treasured art of pure emceeing, today songwriting means just as much as slick punchlines. Droog seems behind the times or unwilling to budge as recent sensations (Wale, J. Cole, Kendrick Lamar, Drake etc.) have been able to in order to make strides with both of these talents.

A throwback to the time when intricate art took center stage over stardom, Your Old Droog has become even more of an incalculable enigma, straying from the beaten path on Kinison. Perhaps designed to get a nod of recognition from Rolling Stone, “Rage Against The Machine” is a meaningless tribute to Zach De La Rocha’s band and “Porno For Pyros” falls short with randomly uninspired quotes like “Jethro meets Death Row, Death Row Tull.” The most awkward moment comes by way of “Gentrify My Hood” as the mid 20s Ukrainian vouches for coffee shops and grocery stores to sprout up in hopes of improving his native Coney Island surroundings. With a dash of irony, this earnest plea stands in opposition to the frustrations of urban dwellers, an extended metaphor for just how confusing Your Old Droog is at times.

Though Your Old Droog has mastered the techniques of flow and cadence, less convinced listeners are left with more questions than answers here. And those critiques are the one’s he’ll have to answer if he is going to secure a base strong enough to carry his career into its next phase.