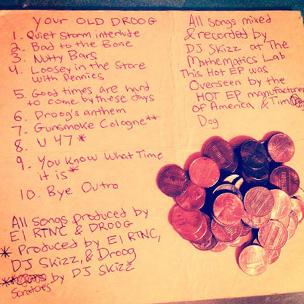 In Hip Hop, garnering attention through secrecy has recently become a peculiar form of irony. Only so many artists have achieved it, yet it is a tactic that has long been employed. In the realms of Rap and R&B, artists like Jay Electronica and The Weeknd both released music using the web in order to mask their identities. U.K.-based Graffiti artist and painter, Bansky has a large following despite his audience not knowing who he really is. The latest name to be added to this list is Your Old Droog. Once believed to be Nas in disguise, Droog’s music has captivated the imagination of many hoping for another reinvention of “God’s Son.” On his self-titled EP however, Droog establishes many distinguishing factors between himself and Nas, while providing a fundamental similarity that his “debut is sick like Illmatic.”

“Gunsmoke Cologne”—perhaps the song that most efficiently validated Nas comparisons—is merely a window into the incredibly agile lyricism of Droog. Produced by DJ Skizz, it treads the boundaries between on-the-corner attitude and black tie affairs. As Droog states, he is a “band leader with his hand on the heater.” At a running speed, he slips in moments of insight, rapping, “Made it through hell and kept the essence of what I do intact / So the lies I do tell be truer than your facts,” while also dishing out punch lines.

As the rest of the EP proves, Droog is well rounded in his use of punch lines, commentary, bravado, the usage of themes and most especially, wordplay. There are countless lines to cite as examples of his manipulation of words. “Nutty Bars,” serves a testament to his skill.

As far as song structure goes, Droog balances out his long-winded verses with gems like the humorous and self-deprecating, “Good Times…” However, it may be safe to say that his best display of songwriting is “Droog’s Anthem.” Coated with an easygoing, feel-good sound and hook, the song is actually a complex analysis of Droog as he finds identity through his anonymity.

“I try to put it aside but Droogs we need to provide / Plus it won’t leave me alone,” he croons, presumably in regards to the Rap game. He then comes to the conclusion that, “If I’m going to do this, I need to be the biggest star that I can be.”

In Anthony Burgess’ A Clockwork Orange, Droog was a slang term used to connote “friend.” The emcee has now used the name as a sort of extension of his subterfuge. As the EP proves, along with songs like “Droog’s Anthem,” there is a powerful familiarity found in an artist who chooses to mask his or herself amongst the general population. What Droog and his audience want is essentially the same thing, and it’s not another Nas imitator. It is an artist who is original, and brave enough to distinguish himself from the “Internet thugs,” or whoever compromises in hopes to attain fame and attention.