Wara From The NBHD - If Guns Could Speak 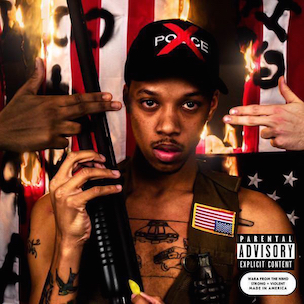 If one were to disregard the confusing album cover, complete with an even more confused-looking child with their pants around their ankles, what you would have in Wara From The NBHD’s Kidnapped album was one of the most welcome surprises of 2014. The content carried an undercurrent of personal hardship, bolstered by his own motley assortment of production techniques. Wara’s follow-up, If Guns Could Speak, is not only an extended play release, but an extended meditation on one of the most pressing issues facing the nation today — gun violence. The cover art of the EP is much more austere this time, and the music’s discordant nature underlines the doublespeak surrounding gun control and its regulation.

“Shotclock” corroborates the claim that Wara is proficient in the art of storytelling, illustrating narratives that come across as soaked in authenticity rather than an artist merely recounting impersonal anecdotes. Like Notorious B.I.G.’s “Things Done Changed,” Wara successfully performs an act of permutation, ushering us into his headspace with meticulous detail and a rousing delivery. After establishing his motives, birthed from the y the track’s end gun violence is touted as an earned right of way. “Trigger Happy” continues in the same vein, maximizing gritty realism realized through piercing bars nestled against the backdrop of an equally harsh sonic palate.

But often the intended gun-themed onslaught is softened by fragmentary recordings. “PNS” sparks with initial vibrancy but fades as a plodding beat sops all the energy. “Surrounded By Criminals” is coated in a resonant militancy that sublimely captures the essence of the album. Wara escalates his lyrical fervor as distorted shrieks in the background act as a sonic melee: “Don’t be surprised if I react off of my lack of respect / See ‘round here the only policy is protect yo neck.”

“Cold play” is the outcast of the EP that beckons confused lines of questioning. Wara remains so faithful to the gun toting thematic of the record that it’s unclear whether the surface verbiage revolving around the bitter feelings of a scorned lover is meant to seen as a metaphor a la 50 Cent’s “Baltimore Love Thing” or Nas’ “I Gave You Power,” but there is nothing substantial to support this theory aside from a quick artillery reference. So one must assume this is a missive about lost love. So be it. It provides a decent respite from the intense anger ruminating throughout, and provides (through no mere conjuring) an out to the parade of gun violence dominating our collective consciousness. Not only is the song a stark departure thematically, but the morose harmonizing is a far cry from the lyrical and sonic vigor of the other tracks that remain loyal to concept of guns speaking, and the entire project is better for it.

“Don’t Call 9-11” remains true to the theme but suffers in imagination, commencing with a synth driven instrumental but dying of content that issues forth more like an instructional manual than a memorable recording. Not that an instructional manual isn’t necessary in these strange times. With gun violence perpetrated against citizenry by those in authority growing, and the cavern of ideology widening between Police and those they’ve sworn to protect, the straightforwardness might throw some off, but it also lays

While If Guns Could Speak is an ambitious undertaking, the brief nature of the project makes the few lapses all the more glaring. Kidnapped was marked by an almost startling degree of adherence to the delicate balance of chemistry, but a few of the tracks here miss the sweet spot. However, the quality moments are more than enough credentials to cement Wara’s exponentially rising buzz.