YG - Blame It On The Streets 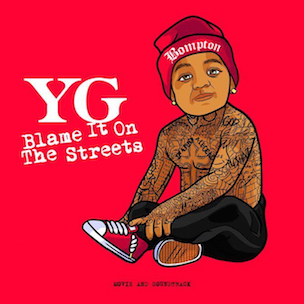 Beating odds that said his career would languish hopelessly, YG returned from the fringes of one hit wonder territory to win the world over with this year’s critically acclaimed My Krazy Life. Taking his gang affiliated lifestyle global, his cohesive manual told a realistic story of reckless activity, which was coincidentally his comrade DJ Mustard’s most ambitious work to date. Respected as one of the West coast’s up and coming contenders, he has proven the ability to make hits with the catchy “My Nigga” and “Who Do You Love” being impossible to avoid or deny. Taking no time to rest on his laurels, Blame It On The Streets is YG’s explanation of his newfound success and a soundtrack to his short film of the same title.

Picking up right where YG left off, Blame It On The Streets should be taken as more of an addendum to his debut than a project in its own right. Placing a new spin on fan favorites, a live version of “BPT” and a remix to “Bicken Back Being Bool” (featuring legends Mack 10 and DJ Quik) both benefit from familiarity, making this EP short on risks. Another revamped moment from My Krazy Life is rock band The Neighbourhood’s cover of “Me & My Bitch” which adds little to the original. Where these songs formerly convinced YG’s audience of his ability to weave narratives, their revamping seems like a rehash.

Eschewing complexity for minimalist narratives, YG rests safely on a blueprint that sometimes lays his gritty reality bare at the feet of entertainment value. Blame It On The Streets is a tribute of sorts to gangsta Rap’s pioneers mixed with Mustard’s paranoiac percussion evidenced by its title track featuring prospect Jay305. “If I Ever” channels the spirit of Death Row Records, functioning as a party record, making sure to include some of Kurupt’s most infamous quotes for good measure. Showing love to another likely inspiration, “(Gon) Ride With Me” borrows from Mannie Fresh and Juvenile’s 400 Degreez, a pleasant surprise for anyone who considers that album a treasure.

“G$FB” most clearly demonstrates the intent of Blame It On The Streets: YG giving his Pushaz Ink affiliates an opportunity to share in his success.  After being overlooked by this year’s Grammy committee, he released “2015 Flow,” defeating the doubts of an  audience that thought “Toot It & Boot It” was his grand opening and closing. As YG continues to straddle the line between music lovers he has won over and harsh critics who refuse to extend him the benefit of the doubt, his sophomore release will determine whether or not his time has come and gone. In the meantime, Blame It On The Streets has enough wizardry left in it to provide for a thumping Rap holiday.