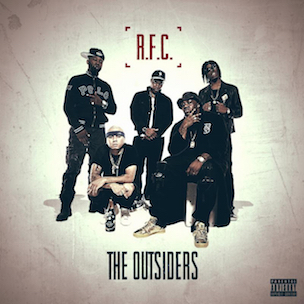 Earning a place in the good graces of tastemakers including Hot 97’s Peter Rosenberg, Smoke DZA continues to brand himself as an independent success story. Cut from a rather different cloth than many of today’s shining stars, he has worked his way up from the underground through hard work and a no frills approach to his street oriented music. Holding down Harlem’s authentic spirit, DZA’s presence reflects a pastime when New York’s vibrant contributions held greater competitive stakes within Hip Hop’s climate. So, he is presently focused on sharing the wealth and introducing Nymlo and Al-Doe amongst the other members of his R.F.C. (Really Fucking Cool) regime subject to critical reception.  Hailing from a town notorious for its excess of hungry talent, The Outsiders is this crew’s attempt at making a statement for themselves as the newest worth a listen.

Likening themselves to a rebirth of Dipset, a variation on A$AP Mob’s original design or competition for Slaughterhouse, the R.F.C. camp makes it a point to represent East Coast underdogs. Set up as a movie of sorts, Smoke DZA narrates The Outsiders as the leader and star of the show, rapping with intensity and variety in service of his comrades. Sharing DZA’s well documented affection for the Polo fashion label, Nymlo has a greater grasp of Rap’s mechanics as opposed to Al-Doe who relies mostly on aggressive intonation.  Intent on spearheading an East coast resurgence, “They Got Money” places an updated spin ‘90s staple LL Cool J’s “I Shot Ya “remix, with versatility as they experiment with trap percussion on “R.I.D.G.A.F.”. The effortless wit and punchlines put to use borrows from certain big apple blueprints, which place rhyme structures at a premium over full-blown song crafting.

And, although there are some good things happening, Smoke DZA and R.F.C mostly come up flawed. MMG upstart Fat Trel contributes little on “Work” and the usually captivating Dom Kennedy has nothing to offer on the flat “Malverde.” Also troubling is the remix to “Errthang Valid,” which has DZA paying homage to Bobby Shmurda’s “Hot Nigga,” a shortcoming barely redeemed by a slick verse from Cam’ron including the line “Blew cheese on a ranch, no buffalo wings.” Though the album is laden with collaborations which mostly miss the mark, one feature worth revisiting is Styles P on the cinematic “Independence Day” with its revivalist laid-back sound giving reminders of classics from New York Hip Hop of time’s past.

Smoke DZA thrives best on his own carrying the torch for what it once meant to represent Hip Hop’s birthplace and epicenter. On The Outsiders he conceptually mocks trends (such as Young Thug’s adlibs and the culture’s general infatuation with lean) on “Say Less,” but this creativity is barely found elsewhere aside from the crime caper “Haywire.” R.F.C’s corner bred slang is genuinely relevant to their urban origins, but the clique’s members are hard to distinguish from each other, not to mention their lack of excess diversity or depth. Taking the opportunity to establish themselves while the Big Apple has an open lane, DZA’s brothers in arms have a bit of a ways to go. The Bravehearts or Murda Inc’s The Murderers were also young, up and coming groups who never quite caught on, and R.F.C can learn much as Smoke DZA continues building up his solo legacy.