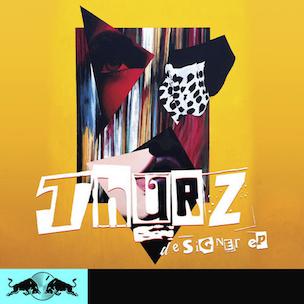 Going left takes guts in 2014. It’s a copycat league, and it feels like every artist is putting on their “turn-up” pants and making their way into the savage hearts of DJ’s across the country. Thurz takes an older take on the genre, and infused with brash Clintonian party synths and a dedication to changing his flow to match the production, he conjures the idea that we may be partying differently soon.

If there were anyway to usurp the “Drill” hornet’s nest or ubiquity of DJ Mustard rhythms, this would be it. Presented by Red Bull Sound Select, Thurz Designer EP somehow creates party anthems surrounding universal events like turning “21,” which is produced by Marlon Travis Barrow, that aren’t corny, bubble-gum filled radio filler. In fact, the EP is a movement in two soundscapes. The first four episodes run like Thurz stepping along some golden road The Wiz like through funk jams. “Right Now” has the emcee waxing poetic over a swirling piano, sax and strings, beginning, “I wouldn’t rap if I knew who my father was.” Maybe he wouldn’t, but he plays with his pitch to induce the nostalgia of rough beginnings without falling into the gutter of its memory. He sews up that testament with the hook, “I’m in the sky right now / On that Superman shit right now / Everybody in the world right now / This that next level shit, right now…” The next three joints move in a similar way, and continue to focus on positive integers in life using Thurz’ voice as a gravely instrument in itself, keeping the songs from floating away into never, never land.

The second tide begins with “Money Over Bullsh*t.” The first track that allows Thurz to let his flow out, the DJ Dahi produced number hits square while a voice pulsates “don’t bring bullshit my way.” Now, this is the interesting part. Ideas sometimes float in some invisible ether above us, and when the yolk breaks you get a flurry of new spaces created in old structures. The heavy focus on positivity, thrust into the public eye with Kendrick Lamar’s “i” envelops the EP in a coat of jubilation. Even when things get lamentable on “Perfect World” and down tempo on “Waiting,” the singular focus of Designer EP is enjoyment. Whether it’s waiting for your window to open or wondering why your time hasn’t come, Thurz and the lush production behind him focus on enjoying the journey instead of acquiring and counting your chips.

All in all, the EP extends its tendrils widely, and at times Thurz is overtaken by the production. There are parts of Designer EP where he feels absent, as he gives room for many other voices to make an appearance. And, at times, the production itself, taking chunks from the Parliament Funkadelic and the rich aural tradition of the 70s, feels out of place in the hands of the young spitter. Still, the EP is a welcome change of pace for the Los Angeles emcee, and he and his team just may be on to something in returning to the airy brilliance of yesteryear. Often, young emcees sound like they are trying to remember something long forgotten when they venture backward, but Thurz may have stumbled upon the essence of something ready to make its return.