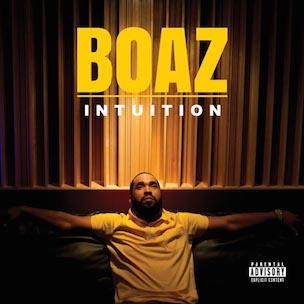 Generally considered a major little city, Pittsburgh is a world apart from Philadelphia (Pennsylvania’s other major metropolis) and any sort of Hip Hop epicenter altogether. Though most associated with Wiz Khalifa, the nondescript town is arguably an afterthought to his career as he has gone on to bask in being embraced by those outside of Rap. With room for a new prideful sensation to take advantage of his lead, Boaz functions as the antithesis of a carefree stoner. Telling a vastly different tale, he hails from the rough section of Larimer and stares the hood’s adversities square in the face. Working for this moment the greater part of the past decade, Boaz invites us along for his rocky journey with his formal debut Intuition.

Boaz uses descriptive verbiage so as to bridge the gap between these lives. “Like This” was Intuition’s lead buzz generator where boom-bap revivalist !illmind mixed hard drums and keyboard smatterings, helping to place Boaz’s determination in a more modern perspective. Also relevant to current sounds, he cleverly designs “Trap” through a double meaning that lays claims to the drug trade while experimenting with the still thriving EDM subgenre of the same name. This concept goes over well, reflective of a creativity that enables Boaz to stand apart from competition. The utmost potential for him to go viral is with “Don’t Know”, a jazzy, laid back cut featuring his province’s independent king, former Rostrum signee Mac Miller. Without sacrificing much artistically, the two espouse the virtues of their respective come ups as Boaz has just recently begun getting a whiff of the success Mac continues to relish in.

Intuition finds Boaz still a bit rough around the edges in regards to filler. On “Rootin 4 The Villain”, D-Block’s Styles P and Jadakiss fail to add much past empty, inorganic rhetoric, seemingly present just for the collaboration fee. Additionally, “Ball On Em” sounds like a mimicry of Watch The Throne with its operatic background vocals and multiple flows that are regally adequate. “How We Law” features dancehall legend Junior Reid, and while the intent is paying homage to international culture, it suffers as an outdated trend. These drawbacks cause the project to lack both cohesion and inspiration at points.

Evolving from criminal ties to cleaning up his act, “Mind Of Men” has Boaz taking listeners on a cinematic jaunt through the intricacies of his once illicit life, while the introspective title track traces his history from then to now. He has the apparent writing talent needed to forge ahead and eventually go recognized as Pittsburgh’s next top tier emcee, but his primary fault lies in sporadic inconsistency as it pertains to putting together a concise package. Rather creating the grand statement of a masterpiece, with Intuition Boaz takes measured efforts to cater to multiple audiences. Guilty of the piecemeal process, he occasionally betrays his most comfortable element of slick talk. Given this is his initial major effort he shows promise, but in a game with fresh and hungry talent springing up every day, Boaz will have to continue improving so as to maintain the spotlight he has begun to gather.