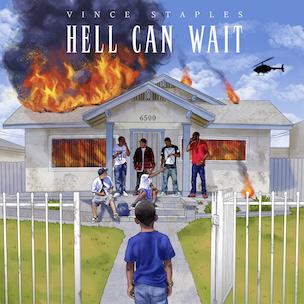 Over the course of a couple years, Vince Staples has crept into the spotlight on the strength of a sometimes-unclear association with Odd Future and a full-out mixtape produced by Mac Miller. This year has been his legitimate breakout, though. A more polished sequel to his Shyne Coldchain mixtape was delivered in March and then a pair of scene stealing feature appearances on Common’s album over the summer added Vince’s name to the short list of “who’s next.” Both followed his well-noticed spot on Earl Sweatshirt’s single “Hive” last year, one of three contributions to Earl’s own stunner Doris. With a watchable, rapid progression in his music and a recent signing to No I.D.’s Def Jam subdivision Artrium, there’s a general open-endedness to Vince Staples’ near future that people seem to agree is worth talking about.

In interviews Staples is easy-going but anti-bullshit, less prone to brag about his own realness than he is to deride a status quo that doesn’t seem to require it of mainstream rappers. In his music he doesn’t petition for authenticity either, instead grounding tales of his crime-as-necessity upbringing in see-it-for-yourself-details. In that sense, he doesn’t deal in Hollywood-ready drug or gang tropes, instead favoring the small-time and far grittier intimacy of his own neighborhood worldview. The album art for Hell Can Wait shows a child watching a house engulfed in flames while half a dozen young men hang out on the porch, their backs to the danger. It seems like a conceptual direction for the young emcee, observing from a close enough distance to feel the heat and apparently unwilling to step back himself.

“My dad kind of taught me the value of life,” he said earlier this year in an interview with Jesse Thorn. “That was right to me ‘cause they did what they had to to take care of us. And I will always appreciate that. I will never look at that as a bad thing. I know domestic violence is wrong, I know crime is wrong. I know all of these things. But…” he trails off, “it’s all perception. Reality is perception.” In his recent music, Staples seems consumed with bearing out what that conclusion looks like. The subdued justification for his father’s drug-dealing, domestic violence, and substance abuse built up “Nate” earlier this year, admiration-fueled reality checks about his view of his dad. On Hell Can Wait, Staples again broaches the topic, admitting to helping his father cover his in-the-house drug dealing tracks and recalling fond memories of sitting passenger on a drunk-driving jaunt to McDonalds on “Screen Door.” “Mom up off of work asking me if anybody came / To kick it with my dad or was he chilling in the alleyway / He was in the alleyway, that’s what he always had me say,” he raps.

No I.D.’s major label attention has increasingly provided Staples with top-tier producer access, three of the seven songs here produced by distinct Grammy winners. Anthony Kilhoffer’s opening beat on “Fire” gives a menacing sense of internal space, the bottom end airy and huge. No I.D.’s production on “Hands Up” rightfully provides the backdrop for what is likely the most politically impactful song of Staples’ young career. The track is his statement against recent and ongoing police brutality; he co-opts a recent protest symbol for the title but doesn’t campaign to raise awareness as much as meaningfully reproduce a “Fuck Tha Police” sentiment, channeling urgency while sirens wail in the background. The song’s bookend lyrics show off Staples’ flair for sober simplicity; “North Division tryin’ to stop my blackness,” he opens, finishing with, “And they expect respect and non-violence / I refuse the right to be silent.”

The EP’s best moment, and what might be the rapper’s standout verse to date, comes in the second half of “65 Hunnid.” “You alone / Car full of niggas but you alone / It’s time to show how much you love your homies,” he raps, segueing into a chilling pre-murder contemplation. Staples’ alienation is compelling, and there’s a careful, tragic complicity in his retelling. “This nigga’s gotta die for this shit to survive,” he raps third-person, a cello in the background, before concluding himself later, “ain’t shit wrong with the truth.” There’s a deadpan matter-of-factness to Staples’ delivery that replaces the glorification of violence with the grimness of the circumstance that he justifies it with.

Hell Can Wait is Vince Staples’ best short release to date and his true-to-form introduction as a Def Jam artist. It’s proof that he can improve for a new audience without compromising to reach them. As much promise as the EP shows in Staples’ songwriting, it’s also the first in a series of tests for Artrium and Def Jam’s handling of his talent. The production that No I.D. has offered him here—and not just in the form of the Chicago producer’s own stellar credit—is confirmation that Staples deserves the attention and room to grow. At 24 minutes there’s a satisfaction in the shortness of Hell Can Wait, partly because it’s so well contained, and partly because it hints at what’s next. These songs are worth the attention he’s drawing, how he’ll sustain it for a full album is worth taking seriously.