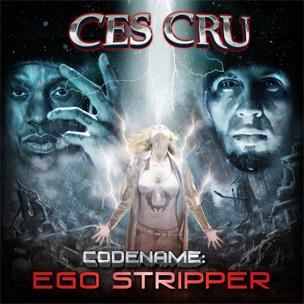 There’s something to be said, bordering on nobility, of rhymesayers that get into the game with clear artistic intentions in mind. Sure, a group that strays away from dim-witted lyrics/hooks and high profile production may lose out on a few award show invites and strip club VIP passes, but audiences reap the benefits of a group that places the fans as the number one priority during late-night sessions in the studio. But sometimes rappers rely on the underground aesthetic a little too heavily, so aside from earning the invisible Nobel peace prize of Hip Hop, music in all shapes still comes down to one deciding factor—is it hot or not?

Luckily, the recent and hopefully permanent incarnation of the Ces Cru (Ubiquitous and Godemis) have amassed a dedicated following because of their faithful adherence to quality releases. Code Name: Ego Stripper takes right off where the acclaimed Constant Energy Struggles left off, commencing with sharp rhymes from Ubiquitous. Part of Ubiquitous’ luster is his Masta Ace/Eminem-like flow, which relies on clear enunciation. The end result is a rapper breaking the third wall, conversing with us instead of just merely trying to meet his 16-bar quota. Although Ubiquitous laces the intro with arguably his best lyrical performance to date, Godemis is not to be outdone, as he is usually the stronger of the two. His bars are equally impressive (“It’s ill though, I kick it like Fei Long with a steel toe / They run amok and couldn’t give a fuck with a dildo”).

The second track, “Jimmy Stewart,” features the duo rapping over more garage-rock oriented Hip Hop, like a Beastie Boys pre-Check Your Head era. Pounding instrumentals work well for a band like the Ces Cru, who are not penciled into any sort of flow. They commonly display their swiveling abilities, like “Give It To Me,” where a rapid, deafening beat is expertly manhandled by two emcees who avoid being lost in the trappings of an entrancing instrumental. Ces is completely competent when it comes to slowing it down and relying on more minimalist sonics in comparison to their more resounding licks. “Double OT” is a nod back to the neo-hip Soul pioneered in the late ‘90s by groups like Slum Village and Things Fall Apart-era Roots.

In the nitpicky world of Hip Hop consumerism and analytics, Ces have a few minor flaws in their approach that could use some shoring up. On songs like “Give It To Me,” Ubiquitous’ mid-rhyme gasps for air are almost as loud as the bass itself. Still it’s hard to be mad at an emcee displaying such intricate rhyme patterns without punching in and re-recording segments of such a challenging verse. On a song like “Whips,” where the beat necessitates a more pronounced break between bars, Ubiquitous is on point. Same with “Pressure,” arguably the most standout track from the album. The quotables from Godemis are endless, and the duo mellows the mood to hit audiences with a personalized confessional of what life is like as part of the Cru.

“Sound Bite,” the lead single, simply jams. Godemis continues to work in the lyrical provocateur continuum, spitting (“The radio don’t even give us no play but we don’t give no shits”). Ubiquitous is equally impressive, making canny allusions to historic figures fans may not have heard since Humanities 101. The most remarkable aspect of the duo is their inherent symmetry. When one emcee is on the mic, the other is perfectly content playing hype-man, leading to a level of chemistry that usually takes groups a while to master. Surprisingly, the songs that feature guest spots don’t detour the feeling, as the duo just envelops them in their orbit, like “Power Play,” featuring label Strange Music boss Tech N9ne. Other examples include “Blindfold,” featuring Wrekonize and “Strange Creature,” featuring Murs, the master of the underground. Featuring Angel Davanport, “Que Latisma” is an even better example. Despite a rapid-fire flow, there is no sign of the gasping lyricist when Ubiquitous steps to the mic.

Ces Cru is still a band with a witty-lyrics heavy approach, but overall Codename: Ego Stripper excels at putting the entire package together; a glaring problem with their last release. Ushering in a lengthy tracklist for an audience easily enticed by instagram, vines, (is-that-a-baby-smoking-a cigarette?) attention spans shows that Ces feel that they deserve their massive viral hype. On that note, “Hope” features the duo waxing poetic over a jazzy instrumental about exactly how far they envision their careers will soar. It is a fitting nightcap to an impressive release.