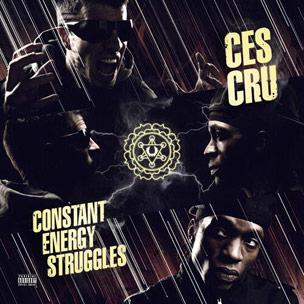 After sharing tracks with indie-favorite Tech N9ne, Kansas City’s Ces Cru received the ultimate co-sign by the indie top dog via a deal with his label, Strange Music. A little over a year later, the duo comprised of Ubiquidous and Godemis drop their first album on the imprint in the form of Constant Energy Struggles. But does the relatively unknown group bring any value to an equation that includes underground heroes like Brotha Lynch Hung and one of the most brutal emcees to touch the mic, label boss Tech N9ne himself?

One thing that’s immediately apparent is that these guys can rap. And they enjoy doing it. Their first singles (“Lotus,” “When Worlds Collide,” and “Juice”) reflect that. There’s a Bad Meets Evil quality to it, not in the sense that it’s another black and white rapper pairing, but it’s two emcees spitting rapidly for the sport with a hint of friendly competition in it.

But Bad Meets Evil, they are not.

Many of the punchlines are well put-together rhythmically, but they fail to excite. At worst, they end up sounding something like battle rhymes from Rap message boards in the early days of Hip Hop on the Internet. But even a verse littered with jabs is permissible as long as you have that occasional uppercut, haymaker, something. If an artist lacks the K.O. in his bars, there’s got to be a hook that ties it all together. But the choruses on songs like “Shake It Up,” “Radiate,” and “Get That,” just don’t pack the punch. Such an approach will appeal to a some fans, but utimately lacks a broader appeal.

It’s a shame because these guys have skill. Peep Ubiquidous’ effortless flow on “Skip” and his melodic rhyming on “Smoke.” Godemis has one of the most commanding deliveries on solo track “Wavy” and can be replayed endlessly. He even gives Tech N9ne a run for his money on “Juice.” References to Duke Nukem are appreciated too. We also have to mention third member of the “cru,” Seven, who provides them with some solid production throughout. Fans might compare them to mainstream so-and-so who can’t form proper sentences, but these are emcees who are striving for greatness and at times their rhymes just aren’t there yet. They’ve graduated from the school of rhyming “lyrical-spiritual-miracle,” but there are moments where it feels as if they’re still having ciphers in the parking lot. It’s a very solid first outing on a bigger stage.