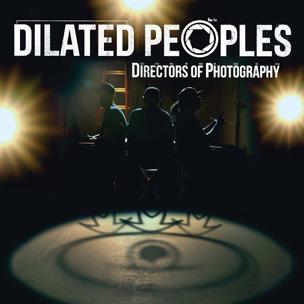 “I’m out in the shed and the tools brand new.” With this single line, Evidence succinctly articulates the essence of Directors of Photography, Dilated Peoples’ first LP since 2006’s 20/20. In those eight years, Evidence, Rakaa Iriscience and DJ Babu have all kept busy, but the mind of the group itself has only progressed. Speaking recently with HipHopDX, Babu discussed the hiatus in better detail, saying, “We needed that break. We needed to decompress. On many levels, creatively, personally.” But the passion for the group never faded. “We all have this incredible love for Dilated and we wanted to keep nurturing it.”

Not only is the album much anticipated, it’s also Dilated Peoples’ debut release on the Rhymesayers imprint. A lot can happen in eight years—be it a label change or just a pursuit of personal satisfaction. But the consensus seems to be that it was necessary. The premise of the reunion was to build upon the foundation already in place. “If anything, we felt like this legacy needs this album,” Babu added. “It deserves this album. I feel like this album brings us full circle.”

The all-star production team, led by Evidence and Babu, includes Alchemist, DJ Premier and 9th Wonder, among others. The beats are predominantly dark, but in a good way. In his interview with DX, Babu alludes to this possibly being the final Dilated album, so the tone certainly reflects the notion. As a result, the verses hit a little harder, while also being a little bit sharper in general. And Babu’s scratches add a valuable layer to the experience, establishing a steady rhythm overall; the head-bobbing is contagious and continuous. Finding 100% sample-based Hip Hop albums in 2014 is almost a rarity, but Directors of Photography is the exception. There are no fancy effects or contemporary trends, like synths or EDM beats, which makes the album truer to its roots than most other recent veteran releases. There really isn’t a bad beat to be found.

Lyrically, the content is refreshing. Evidence and Rakaa frequent the introspective and first person narratives. From the get-go on each track, they pull the listener in by the ears and seize hold. When defining a lyrically dense Hip Hop album, there are many facets involved— be it message, use of big words, flow, and so forth. Dilated touches on all of them. For instance, Evidence and Rakaa use run-on, interconnecting verses on several occasions (“Let Your Thoughts Fly Away,” “Trouble”). Technicalities aside, thought provocation isn’t hindered on the listener in the slightest. On “Good As Gone,” Evidence raps, “Devise a plan then I execute it ‘til I’m undisputed / If the record never stated, I’ve been showing most improvement / At a time when my peers declined I used it as a booster / Used the dedication as a plus, I ain’t used to losers.” Once again, he gives listeners a concise summary of Hip Hop’s changing landscape since 20/20. Artists have come and go, but the Dilated crew has only gotten better. And between this album and Lord Steppington with Alchemist, Evidence alone is having a truly great year.

As mentioned before, Babu’s involvement adds a vital layer to the album. With each track being so infectious, the audio samples he includes act as useful components or transitions between songs. The above average quality of each song enhances the album’s replay value, but Babu’s contributions deserve particular praise. The sequencing and scratching makes the album even more captivating.

Directors of Photography is a top-notch effort. Production and lyrics are both outstanding, and there are few qualms, if none at all. Ten years have passed since “This Way” was all over the radio, but Directors of Photography sounds like the exact same Dilated Peoples formula they’ve been using since The Platform. This time, however, it’s elevated both lyrically and musically. Production trends and rhyme patterns can often be representative of time and era. Directors of Photography, transcends this notion, and in the best way possible. With the cobwebs brushed away and an apparent hunger for more, Dilated Peoples step up and deliver in every aspect.