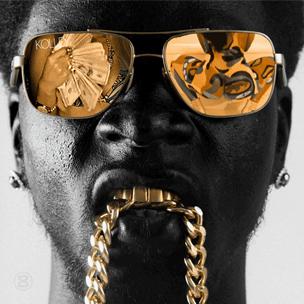 It’s easy to forget Mississippi when assessing the southern Rap landscape. David Banner might be the state’s biggest name. Big K.R.I.T. might be its only other feasible name. Yet, it somehow continues to remain just on the edge of the frame, making a play for marginalized relevance. The Magnolia State’s most recent progeny is perhaps its least polished and most unlikely possible successor to country Rap royalty, but his peculiarity begets intrigue. Kolley, a throaty, methamphetamine-peddling upstart from Bassfield, Mississippi—a town so small you wonder how Rap even got there—has shoved his way into the conversation using bipartisan support from each of the South’s musical factions. He doesn’t quite prove himself worthy of such backing, however. In his debut mixtape, Real Nigga Shit, Kolley packs the credits with names indicative of an A-lister to arouse interest, but his delivery and his often basic rhymes leave much to be desired. He is somewhat of a nuisance; a distraction to his own narrative.

RNS channels southern Rap’s divergent sonic palette. It dabbles in Country Soul, briefly explores contemporary Alt Rap, and invests heavily in the ever-evolving Trap subgenre. Kolley enlists assistance from Zaytoven and booming upstarts like German producer Bobby Johnson (of “OG Bobby Johnson” fame), TM88, and Metro Boomin to frame his first impression. He litters it with abstract production from the likes of New Orleans’ Chase N. Cashe and Ceej (from Atlanta’s Alternative collective, Two-9). Additionally, he cashes in on Mississippi kinship with K.R.I.T. for a feature and a beat (“Poetry In Motion”). The tape leaves no stone unturned. It is an hour-long gallery of rustic Rap in the 21st century full of blistering displays of regional diversity. From start to finish, RNS effectively creates rather compelling surroundings for Kolley’s caustic vocals, both lush and fiery. His scratchy, jarring voice simply detracts from what might otherwise be a well-balanced offering. Regardless of whatever turns his stories take, nothing Kolley says is more interesting than what is happening around him. The production is the star.

When Kolley raps, he slings words through a bouncy Southern drawl in an annoying half yelp heavily reminiscent of Baton Rouge emcee Lil Boosie. (He doesn’t enunciate quite as well, though, and his speech isn’t as metered, so his sense of rhythm isn’t nearly as piercing.) His raps scuff and scrape against your Cochlea, and at times they complement his incredible ear for beats magnificently like in the solo cello-laced “Pills,” which finds him straining his voice to its very limits championing his addiction to prescriptionless pharmaceutical drugs. For the better part of his generic chronicling of trite Rap precepts, however, it is simply brutal to sit through. He places the utmost emphasis on his own words—as most rappers do—and his tracks typically lack finesse because of it. Sometimes a subtle touch is required, but he heavy-handedly wails at the top of his lungs to make his points, insistent upon being the focus of his art. When asked that he take care, Kolley is unable to do so.

RNS isn’t without moments of stunning success. On “Jugg,” Kolley unleashes some of his better rapping: “I just copped the chopper, I know this bitch got bodies on it / Headed to the rosters, rude boys they waitin’ on me / Prescription from the doctor, Roxy[codone] got me skatin homie / Cup full of vodka, and molly still workin’ on me.” His rallies are furious, and he shows real signs of prowess. Perhaps his best all around display of songwriting comes on “Hanna” where he colorfully details his relationship with a wily femme fatale. “Seen Shyt,” the rattling Bobby Johnson-produced anthem, explodes out of subs with a simple but effective bass line. It’s so powerful it makes his shouting seem relatively benign. RNS’ greatest triumph is the glimmering ode to excess, “Too Much,” which boasts a tremendously well executed sample of Alicia Keys’ “Diary,” and it is the only song on the entire tape where Kolley reins it in just enough to be formidable. “I’m too hot for ice / that’s why I’m juggin’ with the glass,” he spits cleverly, dancing around metaphors for crystal meth; it is the only time he himself shines. Even when its good, RNS is mostly good in spite of Kolley not because of him. Despite grand production, RNS stumbles because its central voice can’t live up to the hype.

Kolley has a lot of ground to cover if he hopes to make an impact in the jam packed South, where it seems a new, viable name sprouts up every single day. He isn’t the most promising prospect, but with a bit more subtlety he can certainly put himself in the running. Real Nigga Shit underachieves as a byproduct of his ineffectuality and his own inability to perform up to the standard he set when he drafted so much talent to help him bring his product to the world. If he takes any lesson away from this blunder it should be this: sometimes, less is more.