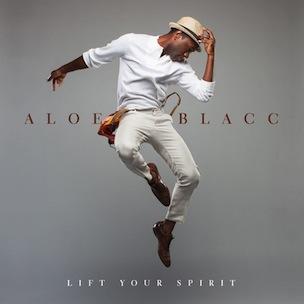 “I’ll be the quick relief to all your stressing,” Aloe Blacc sings in “The Man,” off his third album Lift Your Spirit. The retro-soul singer proves as much in a new Beats by Dre commercial. As Brooklyn Nets center Kevin Garnett stares out a tour bus window, the vehicle drives slowly past a seething crowd, a distressing sight given recent Marcus Smart headlines. “You big gorilla motherfucker,” one fan yells. Garnett tenses up, before he puts on his headphones and “The Man” starts playing.

Lift Your Spirit, also his Interscope debut, follows 2010’s Good Things, where Blacc sang and wrote with warmth and elegance, as if he had studied Bill Withers extra closely. Now, Blacc comforts as he continues to find his own voice.

When Blacc was still in Hip Hop duo Emanon, the then-rapper sounded as frustrated as Garnett appeared; in 2005’s The Waiting Room, his reasons why—actor rappers, lying politicians, his own mortality—pile up like dirty laundry. Now, Blacc’s a sly cynic. He sings “Chasing” with equal sweetness and grit as Sam Cooke would, a delivery that sweetens this ditty about being flat broke. “So keep your calm and carry on,” he sings in the ominous “Ticking Bomb,” his voice rounded and worn, as if haunted by the popular poster slogan’s World War II origins. And in his version of “Wake Me Up,” reconfigured from its country-meets-EDM roots into a jangly Folk rendition, Blacc sings with more force than its weary lyrics seem to warrant. It’s as if he’s slowly regaining the energy to fight back.

If only its last few tracks were just as focused and compelling.Lift Your Spirit only suffers when it winds down, as it panders to Blacc’s booming audience. Conclusion “Eyes of a Child” lists nuggets of conventional wisdom, including a bumper sticker slogan often attributed to Gandhi, as if Blacc hopes to reach every Stones Throw devotee, Voice viewer and Ultra Music Festival goer. His strategy makes for a rare moment when the album feels impersonal.

Blacc’s most eclectic release is still his 2006 solo debut Shine Through; notable tracks include a funhouse mirrors cover of Cooke’s “A Change Is Gonna Come” and a Spanish-language version of John Legend’s “Ordinary People,” giving away his Panamanian-American roots. Lift Your Spirit caters at times to the increasingly rigid constraints of Top 40 throwback soul, with proof that he’s studied The Jackson 5 (the title track), Issac Hayes (“Love Is the Answer,” produced by Pharrell) and The Black Keys (“The Hand Is Quicker”). Other times, though, he manages to defy them. In “Wake Me Up” and “Here Today,” where he recalls Withers and Roberta Flack’s late ’60s folk leanings but also boosts his efforts as if bearing arena settings in mind.