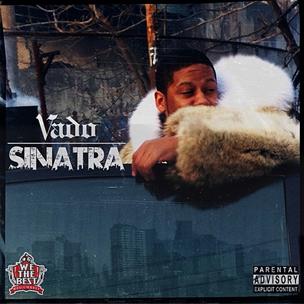 Vado’s early career was a classic case of being in the right place at the wrong time. Born and bred in the streets of Harlem, Vado came out of the gate in 2009 with a natural instinct for rapping, and soon enough he found himself aligned with the biggest name in town, Cam’ron. While the organic partnership between the two yielded a few projects, there was the not so subtle notion that running with the Dips at that time didn’t mean what it did in 2003. Vado made the decision to cut ties and venture out on his own, before signing with DJ Khaled and We the Best a year or so after. His efforts since have been commendable, with his Slime Flu series already four mixtapes deep. Still, Vado has lacked the musical authority that seemed destined from the start.

His new EP, Sinatra, may just be the spark that Vado was searching for. In eight tracks, the 28-year-old provides an honest narrative that packs a lyrical punch. “Week Ago” chronicles Vado’s past life as a corner boy. He goes into survival mode, delivering a first hand account of the success that can be had in the drug game, as well as the pitfalls that occur if you’re caught slipping. “I Need” is the perfect counterbalance to this, where he skips the explicit street talk and forms a sense of urgency in his voice as he calls for the respect of his city. “All of y’all to put the crown on me / Show the city I’m king, and they can count on me / Pour Ace for some that had doubt in me / See the face of my son, and know he proud of me,” he raps over the soulful wail of a Maverick Sabre sample. It’s clear that Vado won’t allow his career shortcomings to become a representation of who he is, and his determination here speaks volumes.

In the past, Vado has disappeared when it comes to collaborative records on his own projects, with his last mixtape Slime Flu 4 becoming a clinic of sorts for this behavior. On Sinatra, the Harlem rapper handily takes the spotlight on “2 Fingers” alongside fellow We the Best labelmate Ace Hood. He faces stiffer competition on the Scott Storch-produced “Look Me In My Eyes,” with Rick Ross barrelling into the booming backdrop with his signature growl. Vado holds his own though, rattling off two verses that match Ross’ ferocity while French Montana plays hook man. Whether this record came together off Vado’s strength in the Rap game or simply by DJ Khaled picking up the phone for his signee, “Look Me In My Eyes” is an impressive cut that proves Vado is built for prime time exposure.

Vado comes up short on Sinatra when he attempts to tackle two New York classics. The first, “Be Like,” borrows heavily from Black Rob’s turn of the century anthem “Whoa!,” even down to the repetitive catchphrase at the end of every line. While Vado tweaks the delivery with his own tagline “Huhh,” the record quickly tapers off into obscurity. His other track, “Pimpin,” gets a bit more creative in the lyrical department as he boasts about transforming into “Mr. Steal Your Girl.” Word to Trey Songz. However, the shoes he’s trying to fill here happen to be owned by Jay Z, which are better left untouched than imitated.

Sinatra isn’t so much a mission statement of Vado’s recent progress, but rather a sharp reiteration of what made the Harlem rapper such an exciting act when he hit the scene five years ago. It’s brash and arrogant; New York at its core. He may be saved by the relatively short tracklist here, which comes as a relief when compared to the lengthy Slime Flu 4. Still, chalk Sinatra up in the win column for Vado. He’ll take it any way he can get it.