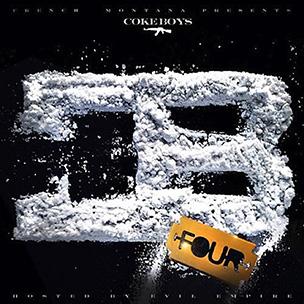 If Rap music (much like the rest of the music industry) is headed into a situation in which selling music will be seen as a not-so cost effective piece of the music puzzle, then the process of being a successful rapper is more akin to being a narcotics-peddling street hustler than ever before. With this idea now having been posited, the subject matter and content of much of French Montana’s New Year’s Day-released Coke Boys 4 mixtape makes all of the sense in the world. As well, it’s entirely possible that the Moroccan-born, South Bronx native Montana—as the head of Cocaine City Records—probably understands the laws of supply and demand from a similar, yet much more illicit game, and is ready to strive to hustle his way to sustaining an opulent lifestyle in a Hip Hop culture governed by #newrules.

Foremost, if listening to a French Montana mixtape in order to discover hyper-intellectual motivation, you’re in the wrong place. This is the soundtrack of your id, somewhere between the *ping* of enlightenment in the back of your mind when you succeed at “accidentally” fondling that girl you’re freaking on in the club in an inappropriate place and the sound of your boy coughing as he hits a blunt back at your crib after another way-too-turnt night at the club. If considering this mixtape successful, realize that it’s the case because it doesn’t ever migrate far from these ideals.

As has been the case since Montana’s 2011 hit “Shot Caller,” Coke Boys 4 is as well as study in just how ridiculously fun (yet now tedious and expected) posse raps and duets can be. Wiz Khalifa and Snoop Dogg join for Lana del Ray “Video Games” sampling single “All For You,” which is as close as you’ll likely ever see Montana approaching the level of romanticism likely already reached by Mr. Amber Rose and the LBC’s leading mack of the ‘90s. As well, taking time off from dogging any and everyone about the state of New York Rap is Jadakiss, who partners with French on two cuts (the remix to “Paranoid” and “88 Coupes”). His twin label heads Diddy and Rick Ross are here as well, the former throwing his name into the sweepstakes to be the first black billionaire on “Worst Nightmare.” If a fan of Chinx Drugz or Lil Durk, you’re in luck here, as they’re significantly featured, too.

With a mix of punch-line ad libbers, veteran bar-bodiers and French Montana, the mixtape— from a lyrical standpoint—is, as expected, an uneven mess. Montana alternates here from being a master of mind-bogglingly laconic delivery to putting together bars that feel akin to the work of one-time 50 Cent associate Tony Yayo. While Yayo was never a featured artist that Diddy ever attempted to compare to the legacy of Notorious B.I.G. (and yes, that unfortunate moment occurs for Montana at multiple times on this mixtape), he was a serviceable rapper with a few hit singles under his belt. The attempt by Montana shows that while he has a single called “Ain’t Worried About Nothin’,” the idea that he is a one-trick Rap pony may be proving bothersome. Do note the work of Jadakiss here, as if having lost track of the Lox member, his delivery and execution are still on point.

This mixtape doesn’t leave any doubt that Montana is still the king at-present of the East coast variant of vapid, yet soulful lifestyle Rap songs. However, at 70 minutes in length the mixtape it is a little too long and goes a little too far in belaboring the guns, bitches, drugs and money associated with quintessential New York gangsta Rap tropes.