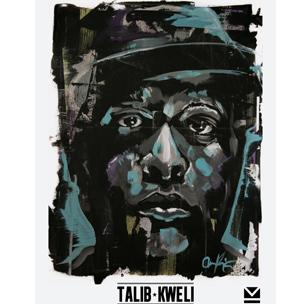 Originating from the late ’90s era largely remembered for Hip Hop’s former civil war, Talib Kweli‘s disposition has always stood to bring about change and balance in the mainstream without being overly angry or confrontational. Rather than staging a coup against the music industry, his at times confusing strategy of infiltration has been to broaden his exposure by aligning with those from completely opposite sides of the spectrum, examples not limited to Skyzoo and Gucci Mane. Witnessing the veteran flesh out this identity complex hasn’t made a smooth ride for the set of believers who have confined his ideals to a progressive bent, seeing potential for him to fully betray the pride he once conveyed. Faced with reconciling the stringent wishes of fans and the right to his artistic freedom, Gravitas is Talib Kweli’s quick follow up to this past spring’s aptly titled Prisoner of Conscious.

Breaking fresh ground with the latest addition to an already prolific catalog, Gravitas finds Talib Kweli simultaneously wearing the hats of businessman and creator. A proponent of the “new rules” campaign, he has breathed air into his career by independently cutting off outside forces seeking to profit off of his labor. Pushing the envelope conceptually, Kweli edges towards territory hardly explored by prominent emcees, as “Wormhole” tackles our culture’s obsession with the supposed Illuminati. Its surprising effect is slightly offset by “State of Grace,” with a contrived double time flow lamenting women losing their love for Rap, a worthwhile topic were it not for him covering this theme in prior rhymes. Another familiar angle, “Rare Portraits” honors the Brooklyn mainstay’s longevity and resilience in a cinematic and introspective fashion, giving respect to John Forte, DJ Hi-Tek and Yasiin Bey amongst the primary names to play factors in his trajectory.

As has become his typical procedure, Talib Kweli uses the help of comrades on Gravitas, most of whom contribute to the greater picture instead of taking away from it. “Violations” features an edgy guest spot from Raekwon and a vintage highlight compounded by Black Thought’s show stealing appearance on “Art Imitates Life.” Dim moments appear as Big K.R.I.T. lends a helping hand on “Demonology” where substandard rock influenced production surrounds poignant messages of spirituality, along with the high spirited Underachievers duo whose Southern deliveries come off as derivative on “New Leaders.” Though these tracks are less inspired, they don’t distract from the running dialogue built around boundless ingenuity.

Nearing two decades since his earliest professional recordings, time has seen Talib Kweli evolve into an eclectic solo act separate from his past incarnations as half of supergroups Black Star and Reflection Eternal. Thus, Gravitas is a superior showing, whereby he will likely reap the benefits of continual hard work and dedication. The spirit of J. Dilla is kept alive on the album’s closer “Colors of You,” a mild concession to the rigid-minded audience looking to keep him boxed into a preexistent sound. With this release, Kweli has placed himself in a fortunate position where we can rest assured his next moves will be completely self-determined regardless of critical skepticism.