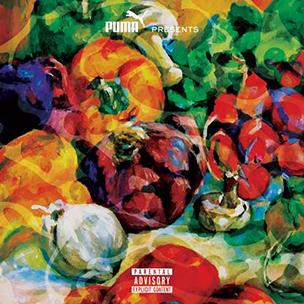 In 2011, a not-yet-signed Rockie Fresh enlisted Inglewood, California’s Casey Veggies for a collaboration that would end up on Fresh’s LP, The Otherside Redux. Produced by Uncle Dave, the track was titled “Duckin N Dodgin,” and it showcased both emcees basking in all the glory of their youth and up-and-coming status. “A young nigga getting paper,” they chanted plainly over the hook. Since then, the two have been running in unison through their blossoming careers—Rockie was picked up by Rick Ross’ Maybach Music Group while Casey has maintained his independent grind, reaching a new phase of growth by his latest solo mixtape, “Life Changes,” which dropped earlier this year. Now, as 2014 approaches, the two have come together once again for a 10-track project appropriately titled “Fresh Veggies.” Still young but presumably getting much more paper now, Rockie and Casey make the point in their new project that while some things have indeed changed, a lot has also stayed the same.

Perhaps the most integral component of the Puma-sponsored mixtape is the production value, which is both cohesive and eclectic. Supplied by the likes of Hit-Boy, Ray Reel and yes, Uncle Dave among others, the sonic framework of “Fresh Veggies” places both Casey and Rockie in a position to remain tastemakers in the ever-innovative new school. Songs such as “Sacrifice,” may “sound like Christmas” to the listener, while “The World” is a holiday in it’s own right. Every song has a distinct personality. “Aladdin: Interlude 2” for example, has ample car potential through its heavy bass, while “All That,” featuring a memorable verse from Juicy J, is like R&B meets ratchet. Where a listener might not like tomatoes, Casey and Rockie have celery, and if celery doesn’t do it—well, you get the idea.

There are pros and cons to an all vegan diet, however. Unfortunately, the fault of the mixtape is found in its lyrical integrity. It’s easy to get the hint that the two—in hopes of not stepping on each other’s toes—are letting the music come naturally. Take “Celebrating Life: Interlude” as an example. A sentimental piano laced with hi-hats and slight drums make for an easy recipe to one of the first releases of the mixtape. However, “Celebrate life, sip champagne,” takes for granted the listener’s readiness to comply and in doing so, exposes the song for all it’s cliché. It would be nice to know exactly what events are prompting said celebration and the subsequent champagne sipping.

It should be made clear that Rockie Fresh and Casey Veggies are not sub-par emcees. While it is understood that maybe these two just want to have a good time, the listener is left starving for significant moments of introspection, heightened tension or true dialogue. “Whip It,” a song from “Life Changes,” finds Casey feeling a certain way, stating, “Livin’ lethal, dodgin’ evil when I’m steady flexin’/ Sending signs to the sky, hope He get the message / What do you do when your first rhymes get old / Your mind get grown and it’s time to get on?” Such lyricism hints at themes and topics similar if not the same on “Fresh Veggies”—getting on, striving, fast living and maturity. However, the listener does not find the same level of brilliance through words as they may find in either rapper’s previous music.