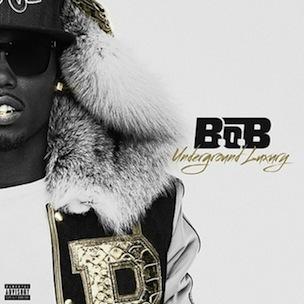 B.o.B. seemed to be turning a corner on “Bombs Away,” the portentous intro to 2012’s Strange Clouds garnished with a monologue from none other than Morgan Freeman. It was the type of mad-at-the-world syllable cramming expected of a 23-year-old on his second album, albeit an unexpected jilt from the artist already perpetually perched atop Billboard charts with hooks from Bruno Mars, Taylor Swift and Paramore’s Hayley Williams.

“And I ain’t too big on duality, but / You think you know me, you ain’t seen the half of me,” he rapped, eager to shed the Hip-Pop image that carried him through his radio-ready debut two years prior.

As it turns out, B.o.B. was huge on duality. Some of it worked to his advantage; stylistic duality cast him as one of mainstream Hip Hop’s most eclectic musicians, able to run through genres with aplomb while holding down collaborations with everyone from Lupe Fiasco to Janelle Monae. Lyrically, duality came back to hurt him. But it set the stage for Underground Luxury to make a discernible artistic jump: either a fleshing out of duality on an album with a dichotomous title, or a focus on quality, consistent output now that duality was battled and perhaps put to rest. When B.o.B described Underground Luxury as “a reintroduction of his roots” and “a lot edgier” on Power 105.1’s “The Breakfast Club” last spring, it seemed that the latter would happen. It didn’t.

But that’s not what makes Underground Luxury a disappointing album. B.o.B. isn’t obligated to live up to his own standards of instrumentation or thematics, nor is he penalized for focusing more on pole dancers than his guitar. Rather, Underground Luxury is at best a blandly mediocre album because of an inexcusable lack of execution and a sudden loss of the charisma and creativity that got him to this point. Party Rap can of course still be creative—it’s inescapable for a dude that shares a label with Tip, Trae Tha Truth, Killer Mike and Travi$ Scott. But on the 10 or so songs that fall under the Luxury advent, there’s none of that to be found.

It’s damn near criminal to rhyme “bottles” with “models” in 2013, but B.o.B. does exactly that on the opening song “All I Want,” which uses a chant of “All I want is money, money, money, money” for a hook. Things don’t get much better: the Future-assisted “Ready” is catchy, but features lines like, “I do it daily, I do it daily / That’s my swag, you should pay me,” and “Cranberry Moon Walk” has him boasting about “banging that bitch in her baby maker.”

In today’s oversaturated market for strip club Rap, originality becomes the benchmark. Yet after three years of diverse instrumentation and vibrant double-times, B.o.B’s transition to a new subgenre is almost laughably predictable, and shows no semblance of the inventiveness he ascended on. He flounders on his own—monotonous synth and “East Side, West Side” callouts make “Back Me Up” one of the album’s most forgettable songs—but the biggest shortcomings of B.o.B.’s relaunch are highlighted when he partners up with club Rap’s veritable juggernauts. Hearing him unspool the lines, “Don’t be scared bitch, throw that back / This dick right here is cleaner than a hypochondriac” with chopped cadence on “Throwback” is ugly enough; it gets considerably worse when going against a smoother, more rhythmic Chris Brown in the next verse. “Picture-perfect body, that’s a Kodak there” from the lead single “HeadBand” falls flat. And comparatively, 2 Chainz’s feature forces a good laugh with punches like, “Middle school, I was getting head on a 10 speed.” It was nearly impossible to root against the kid spitting vaudevillian verses on “Magic” in 2010; it’s pretty much impossible to root for that same guy who now says, “Dick so big, call it four by four” on “Wide Open.”

Underground Luxury does have its rare moments. “Paper Route” sees B.o.B. marathoning dissenting bars over rising synth and crashing percussion, and “John Doe” is an honest attack on infidelity and addiction. But neither do enough to buoy an album that starts and ends with unimaginative materialism. In post-Macklemore mainstream, burdening the position of alternative Hip-Popper or even nice-guy rapper is weighty, and it’s hard to blame B.o.B. for wanting to acclimate himself to a different scene. But the startling lack of creativity he exercises in doing so makes Underground Luxury easy to write off, and the duality that once powered crossover appeal is now hard to detect.