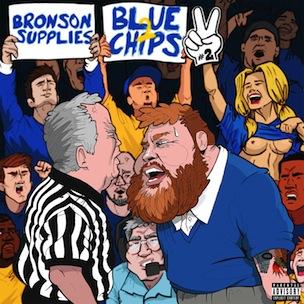 In a genre often compartmentalized, Action Bronson causes problems. The dude is predictably unpredictable and impossible to pigeonhole, constantly mixing the grandiose of a Ghostface solo album and the irreverence of a De La Soul skit. On “Blue Chips 2,” Bronson straddles both styles with aplomb, and the result is one of the stronger—if not stranger—projects of the fall.

Bronson isn’t the perfect lyricist, although his pen game certainly holds its own with sharp multisyllabics and a cache of metaphors. The mixtape also isn’t novelty Rap, but it’s hard not to laugh as the Queens native spits such vivid and cartoonish storylines while jabbing with lewd one-liners. It’s his eighth project in the last three years, and though Bronson still hasn’t switched up his formula much, “Blue Chips 2” hits as fresh as the original did in 2012.

Despite its free form, the tape does function as a sequel: Party Supplies is back behind the boards delivering brash horns and unconventional samples, while Bronson is still rapping about getting high, cooking dinner, smuggling money and charming hookers. “Blue Chips 2” features a follow up to “9-24-11” and somehow sets the bar even higher on name-drops of ‘80s athletes, B-list actors and historic mobsters—Gary Sinise, Beau Brummel and Placido Polanco (!) make appearances in the just first half of the mixtape. Fans of Action Bronson get more of what they’ve come to expect, and there’s not much of a learning curve for new listeners.

“Blue Chips 2” is a deranged stoner narrative, 19 garish adventures with a protagonist that’s equal parts Hunter S. Thompson and Austin Powers. Bronson hides meth inside of a Shih Tzu on “Flip Ya,” surprises his girl with face-to-face toilets on “Rolling Thunder,” and coerces Patrick Ewing to miss his famous finger roll in the ‘95 NBA Playoffs on “9.24.13.” There’s no deeper theme or message, just inflated Lifestyle Rap from a rapper with no semblance of an attention span.

That lack of attention is seen not only by song but line-by-line. Bronson’s non sequitur style includes punches that seem to be missing a line or two of set up, and obscure cultural references that are brought in without warning. “Flicks with Ellen Degeneres, rockin’ Perry Ellis / Been a degenerate, cutting ribbons with senators,” he raps on “It Concerns Me.” It’s not quite concerning given Bronson’s charisma, and as out of control as things get, it’s easy to start rooting for his ego trips and rolling with the randomness. Bronson fluctuates between a con man, a wrestler and a comic book villain, but he doesn’t stumble once in his quest for the listener to pull for the bad guy.

Not all of the praise on “Blue Chips 2” can go to Bronson though. After dropping a solo album of funk and foot-stompers, Party Supplies comes correct with complimentary beats throughout the project. He lets Bronson weave in and out of menacing horns in the Allen Iverson-sampled “Practice,” flips The Champs’ “Tequila” into the soundscape of a drug heist in “Pepe Lopez,” and somehow melds John Mellencamp, Phil Collins and Peter Gabriel into the frenzied “Contemporary Man.” The idea of one emcee and one producer is all but lost in Hip Hop these days, and the chemistry forged between Bronson and Brooklyn-born Party Supplies helps capture New York’s cultural palate with authenticity.

No mixtape’s without its shortcomings. “Blue Chips 2” runs an extra three songs longer than its predecessor, and some of the tracks on the back end begin to blend together. Bronson’s cousin Big Body Bes steps in a number of times to give songs an unnecessary spoken outro; on “Twin Peugots,” Bes spends a minute rambling, breaking up stellar verses from Bronson and Mac Miller. And ending multiple tracks with commercials—“It Concerns Me” inexplicably concludes with an Applebees ad, while a Phil Mickelson spot for joint pain medication wraps up the tropical “It’s Me”—gets distracting.