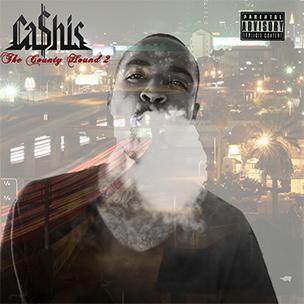 Since gaining national recognition alongside a roster of talented but seemingly indistinguishable peers on Eminem’s Shady Records imprint, Ca$his has largely remained an enigma. His flow was respected enough to held is own on the 2010 all-star track “Syllables,” which, along with fellow Shady signee Stat Quo, featured Dr. Dre, Eminem, Jay Z and 50 Cent. But his own hiatus and a rebooting of Shady—a label Ca$his amicably departed—left questions about the man behind The County Hound EP and The Art Of Dying. Ca$his returns with a full-length sequel to The County Hound, meant to independently capitalize on the flashes of talent he’s shown since 2006 and possibly give outsiders a further glimpse of exactly what he embodies as an emcee.

With production largely handled by his Bogish Brand partner Rikanatti, this installment of The County Hound finds Ca$his in cruise control for the majority of the project. His flow is effortless, and there’s a discernible improvement in his writing and song structuring. He easily pairs multi-syllable couplets, even when opting to rhyme about run of the mill topics such as drugs, women, money and what happens to those who disrupt his enjoyment of them. Take the following offering from “Look At Me:”

“I’m back in the front  / Still packin’ a blunt / Got a ratchet rat, nigga I’m gone fuck / Stacks I’m set, flash like Kodak / Get a callback, like never get your hoe back / I’m a cold mack no ‘Lac / And I rolled strapped, everybody know that / Nigga get racks that you can’t fold back / In a spot so packed, just to hear me rap nigga…”

The puzzle like precision with which the rhyme is constructed is top-notch, but the actual subject matter—racks, reefer and rats—leaves a bit to be desired. Over the course of the first half of the album, Ca$his offers this type of fare in the form of club tracks, weed anthems (“Hay”) and the obligatory ladies dedication (“I Just Wanna”). Depending on the production and guest appearances, these songs range from solid to spectacular. None are remotely wack, but the lack of range in his topics can sometimes make them difficult to differentiate. In that regard, Rikanatti’s incorporation of live instruments—“I Just Wanna” essentially features a four-piece band—spices up the proceedings. The mini-Shady Records reunion found on “Mind On Money” and the likes of Mistah F.A.B. and Crooked I, (“Imma Hustla”) offer Ca$his both some diversification and sparring partners.

Much like Joe Budden during his Mood Muzik days, Ca$his is someone you want to see win, but his projects reach their highest heights when he’s rhyming about loss and the emotions that come with it. This isn’t Drake-inspired music about drunk dialing your ex and cupcaking strippers. It’s drug-induced paranoia, night sweats, missing your children due to incarceration and the consequences that come from doing dirt. The true horror on The County Hound 2 doesn’t come from Ca$his threatening to bust someone else’s head, but rather from the bleakness he channels from within his own.

“I’m just watchin’, being patient / Prayin’ for my own existence, some say I’m a mental patient / Drugs have taken over me / Sorrow is controlling me / Follow my blind heart, tomorrow on the coldest streets / I’ve been crying for a week / Will is weak, can I speak / Without somebody judging me, pushing me and shoving me / Mama if you love me, you would really let me go / But I live for a cause, that I don’t really know,” he rhymes on “Serenade My Life.”

Ultimately, The County Hound 2 serves as a welcome return for loyal Ca$his fans. Name recognition from his Shady days, production from Eminem and some of the lighter singles will likely draw in newcomers. Repeated listens offer a bottom-heavy album; the first half of which both informs and sometimes detracts from the latter portion with trite subject matter. But there’s enough raw talent here to impress a diverse cross section of fans, and when Ca$his chooses depth over accessibility he’s still scary good in the booth.