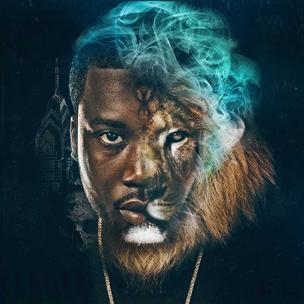 With the release of “Dreamchasers 2,” Meek Mill pushed himself into the forefront as one of the top up and coming artists in the game. However, one week before Meek dropped his debut album, Dreams And Nightmares, Kendrick Lamar’s good kid m.A.A.d. city was released to critical acclaim, sales, and fan hysteria. Add in one of the worst storms to hit the East Coast in decades in Hurricane Sandy, and it’s safe to say that the buying public could have been somewhat distracted when Meek Mill’s initial retail offering hit shelves. More recently, Meek has made it very clear he feels undervalued in Hip Hop, and that he feels he doesn’t receive his deserved respect. “Dreamchasers 3” may not take Meek Mill to new heights, but it will remind listeners of his capabilities and what he’s been doing.

“Dreamchasers 3” opens in a somewhat different fashion than the intros fans have come to love and expect from Meek Mill. Nevertheless, “I’m Leanin” is as much of a Meek record as any he has ever released. The track features a light build up to a heavy bassline—with Meek bouncing all over the record—using a flow he made popular before it could be found on some of your favorite rappers’ singles. For better or worse, “Dreamchasers 3” is a refresher course in what Meek Mill has brought to the game with the past two “Dreamchasers” projects, and for part of Dreams And Nightmares. Anthemic, feature-laden songs are available in abundance. “I Be On Dat” finds Meek rapping alongside Fabolous, a stop-and-go flowing Nicki Minaj, with French Montana exclusively on the hook. Meanwhile, on “Dope Dealer,” MMG label boss Rick Ross, and Nicki Minaj join in, with the latter using a Meek-inspired flow. Of the many features, Jadakiss clearly shines above the rest. “Heaven Or Hell,” features an interpolation of Club Nouveau’s “Why You Treat Me So Bad.” And while that melody will likely invoke memories of “I Got 5 On It” by Luniz, Jadakiss’ following bars are most memorable:

“Far as the hood go, I acknowledge it / But whoever ain’t a snake, usually a follower / Luckily, I could tell the difference / My man coming home, my other man getting sentenced / Soft niggas usually send the hate through the bitches / Jealous Instagram niggas hatin’ on your pictures / We dream chasin’, y’all niggas walking behind wishes / Without working for it, not often you find riches…”

Meek rarely appears alone on “Dreamchasers 3,” and “Lil Nigga Snupe” is arguably the project’s most poignant moment, with Meek questioning the senseless murder of his protégé as well as the conditions surrounding the 18-year-old’s slaying. The track “Hip Hop” also produces successful results. Over a vintage drum sample, Meek tells the listeners his story of coming up in Philadelphia, rhyming, “It’s crazy when I seen my own neighbor hitting the soft / I was thinking in my head, like I gotta get with this raw / She was getting tore up, and she watched me grow up / Right in front of the kid, she fucking her nose up / She thinking like so what / My homie got colder / She even sold the Nintendo, I’m thinking like hold up / I seen my homie’s mommy turn into a zombie…” Meek clearly has the ability to paint vivid pictures as shown by several of the standout tracks. When not rapping about his struggle, Meek often spits tired punch lines lost to those caught up in the bass, or energy of his flow, but very apparent to those listening.

Unfortunately, “Dreamchasers 3” also has more than its fair share of filler. Meek Mill in Auto-tune is exactly what nobody wanted, and it’s provided on “Make Me.” Additionally, “Money Ain’t No Issue” is ripe with clichés. When Meek isn’t repo-ing other people’s girls and buying them red bottoms for sexual favors, Future raps, “Bad bitches from Beverly Hills, I’m gonna fuck her good on TMZ.” Not to be outdone, Fabolous, spits, “I’m tryin’ to chill, but niggas really, really wanna make me talk reckless / Have these niggas on ya’ neck, you don’t really wanna talk, necklace / Heard you got L’s in the hood, you don’t really, really wanna talk Lexus / We got right now, you think niggas really wanna talk Nexus?” It’s a trilogy of sub-par performances.

Fans of Meek Mill’s “Dreamchasers” or “Dreamchasers 2,” are bound to find much to like about “Dreamchasers 3.” However, when Meek’s competition is talking about raising the bar lyrically, and he continues to rap about repo-ing women, and comparing diamond flooded watches to the disaster that was Hurricane Katrina, it won’t be surprising if his overall standing within the game takes another hit. This edition of “Dreamchasers” is closed out with what sounds to be an intro to Meek’s next effort, and hopefully that project shows the growth many think Meek Mill is capable of.