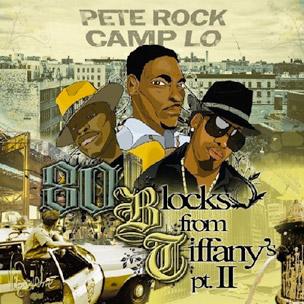 It starts, as many mixtapes do, with a simple introduction.

“Ladies and gentlemen, back by popular demand, it’s 80 Blocks From Tiffany’s,” announces legendary New York City producer Pete Rock, his voice competing with the symbol crashes and guitar riffs from what sounds like a live band in the background.

With a cast that consists of Soul Brother #1 and fellow Golden Age rappers Geechi Suede and Sonny Cheeba of Camp Lo, no such introduction was needed.

Two years after the aging super-group released the self titled 80 Blocks From Tiffany’s mixtape in 2011—which took its inspiration from a film covering gang life in the Bronx during the ‘70s and ‘80s—the trio is back with 80 Blocks From Tiffany’s pt.II, and wasted no time in reminding us that the youth who dominate today’s Hip Hop may still have a thing or two to learn from the game’s veterans.

For the Pete Rock faithful, jazzy instrumentation over smooth-sounding snare hits are nothing new. What may come as a surprise is the way he has maintained his original sound while allowing it to evolve and grow.

“Ladies And Gentleman” begins with an upbeat electronic line—accompanied by the usual snare hits—that carry Geechi Suede, Sonny Cheeba and featured artist, Talib Kweli through to the end. While Talib bends the beat to his liking, slowing down his cadence like some smooth-talking pick-up artist, the two members of Camp Lo race along, displaying their often slept-on lyrical ability. Just as he’s done for the past two decades, Pete Rock alters the beat at the end of the track to give the listener time to reflect, only at the end of “Ladies And Gentleman,” he offers up a review of the trio’s first mixtape.

“I think what’s fascinating about the setup so far is that the volume one is really a display of classic Camp Lo acapellas over classic Pete Rock beats…whereas now we’re moving into the actual motion picture of it with volume two,” says an unnamed critic. And why shouldn’t 80 Blocks From Tiffany’s brag and boast? Not only have Pete Rock and Camp Lo earned it through their respective storied careers, but their latest collaboration doesn’t miss a beat.

It seems the Hip Hop community has taken note as well; 80 Blocks from Tiffany’s pt.II features an impressive list of featured artists, from younger rappers like Mac Miller (“Megan Good”) and Ab-Soul to fellow veterans like M.O.P. (“No Uniform”) and Uncle Murda, proving that Pete Rock’s rhythms can cater to both the old and the new.

Tracks like “80 Blocks Party” take the listener back to a time when Rap relied on instrumental samples, like the song’s slow trumpet fanfare, instead of 808 drum loops. Other tracks, like “No Hook,” take their inspiration more directly from the Golden Age; Pete Rock augmented his beat from “I Got A Love” off the 1994 Pete Rock & C.L. Smooth album The Main Ingredient for the song, which features raps from the producer himself.

That’s not to say that 80 Blocks From Tiffany’s pt.II is flawless, a nearly impossible feat for such a long mixtape. Yet its ability to capture and add to a sound that many perceive as long gone is admirable, especially considering the number of failed attempts of classic artists to reenter the Rap game.

In the words of a pitch-altered guest who interrupts the song “Don’t Ya Just Love It,”: “This 80 Blocks thing is so important, man. We’ve gotta make this a part of our history man.”