Tech N9ne - Something Else 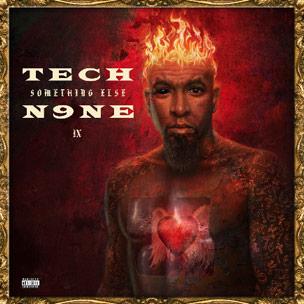 If someone merged almost every musical genre and trapped them in a kaleidoscope, it would sound like Tech N9ne’s thirteenth studio album, Something Else. Comprised of delectable guitar riffs, Heavy Metal pleasures fused with simplistic yet versatile beats and proactive, bloodcurdling sounds, the “Riot Maker” delivers an impressive project most wouldn’t have the balls to create. Broken down into three integral parts: fire, earth and water, the Kansas City native serves up a striking album that speaks to the complexities and contradictory nature of man. Extremely candid and reflective, Tech covers much ground, as the album becomes your compass through his evil brain/angel heart.

With a guest appearance list straight from a blogger’s dream (The Doors, Kendrick Lamar, Game, Cee Lo Green, Big K.R.I.T. and Serj Tankian), Tech recruited some predictable yet eclectic artists that aligned perfectly with his goal to push musical boundaries and showcase his artistic autonomy. He alongside his production team built upon multiple classic elements to create one uniformed sound that is as fascinating as it is confusing.

Haunting and sinister, the “Fire” tracks represent the dark, yet vivid imagery and thoughts within Tech. Songs like the terrorizing “Straight Out The Gate” which blend Rock and orchestral sounds, featuring System of a Down’s lead vocalist Serj Takian, are a good example of flawlessly marrying genres. Meanwhile, “Fragile” finds Tech N9ne and Kendrick Lamar annihilating a clear-cut beat through their bars with a concise delivery, while expressing disdain for critics. And Kendall Morgan’s emotive vocals entice the track making it a contender for best on the album.

As expected, the “Water” chapter is somewhat lighter in subject mater and definitely isn’t as introspective or weighty but far more deafening. Guests abound but sometimes don’t bring much aside from name recognition, and the most lighthearted portion of Something Else almost becomes monotonous in its goal to break up the heaviness it’s sandwiched between.

If any piece of this album represents Tech’s heart, “Earth” is it. “My Haiku-Burn The World” is emotionally taxing, with Tech and Krizz Kaliko playing off their solid chemistry as the electric guitar tantalizes the beat while asking, “Why did Adam shoot the school up?” Tech covers everything from death and epilepsy to abandonment. It is nice to hear him occasionally slow it up and allow us to internalize his lyrics, because he shines when he’s this transparent. The true standout is “Strange 2013” featuring The Doors. There is always some hesitation when any artist attempts to flip a classic, but Fredwreck nailed it with this delightful spin on The Door’s landmark “Strange Days.” Slightly reworked, but not enough to make it unrecognizable, this is the perfect middle finger moment to anyone that though Tech was a fly by night artist.

Something Else in all of its intense, loud, confusing and obnoxious glory is fluid in its musical movement and sincere in its content. The album is contradictory in subject matter and sound yet speaks to the idealistic and free flowing approach Tech takes when creating music. One minute, he is a fire-breathing rapper with a large amount of darkness that could slice your retina with one verse. The next, he is a softer, blemished parent that wants what’s best for his seeds and just likes to breathe easy. But this flip is what makes the album work and gives it its core. It’s authentic and full of heart while capturing the duality of man. Some may be confused with its composition and not sure how to label it, while others will bask in its inventiveness. Even the skits play a key role, and production wise, it’s stellar amid a few bad apples (“With The BS,” “Dwamn”). Seven—who handled most of the beats—alongside Fredwreck and Drumma Boy aided Tech in blending genres and truly giving this album an impressive backdrop that tells just as much of a story as the lyrics. Tech N9ne sounds sharp over complicated production that has many layers to peel back. And he took big risks that will pay off, as Something Else will surely be a contender for album of the year. There are a few holes—the project’s length and forgettable appearances (Wiz Khalifia on “See Me”)—but overall, it’s an incredible album that will keep that hint of burgundy in the sky.