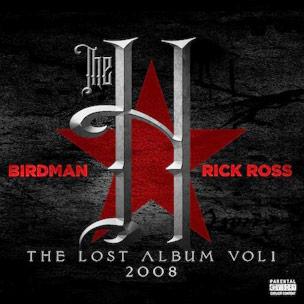 As the story goes, Birdman and Rick Ross linked up in 2008 to record a few tracks in the studio, which subsequently led to 40 songs being created in the span of 10 days. After letting the music sit for five years (and presumably making other records that were more worthwhile), the respective head honchos of Cash Money and Maybach Music Group liberate a set of recordings from that occasion with The H: The Lost Album Vol. 1.

For perspective, Birdman was in between his 5 * Stunna and Pricele$$ albums in 2008, while Ross had just released his sophomore set Trilla. The H (short for “The Hustle”) follows a similar trajectory of material, with an emphasis of luxury, women, and a bit of street talk saturating every corner of the project. They forge their best attempt with “Flashy Cars Movie Stars,” a high octane record that personifies their lifestyle (with a motivational speech from Baby preceding it). “Betty Stout” finds a convincing groove too, with Ross and Birdman scheming over a soulful backdrop. In fact, production on The H is the one place where the ball is not completely dropped. “Why” admirably rides out with crisp drums and a moving melody, while “Sun Comes Up” is a smooth cut that accentuates the daily grind for Rozay and Birdman (though they ceremoniously remove Glasses Malone from his own Beach Cruiser single).

The rub comes when both rappers bury themselves with unimaginative rhymes and incessant references to a hustle that doesn’t translate well in the music. Whether it’s Ross’ ridiculous claims on “Addicted” (“My ho was gay, now she addicted to dick,” “I get them grenades, we call ’em ‘Bye Byes’ / It hit your Escalade, pussy nigga, bye bye…”) or Baby fumbling for a clever thought on “Justice” (“Come through nigga when I came through shooting / Niggas popping off so I had to shoot him…”), The H sounds more like a demo tape from a lyrical standpoint. It doesn’t help the cause either when the short list of guests are d-list rappers. With one listen to tracks like “Pop That Pussy” and “Got A Bitch,” your computer’s recycle bin will be 20 megabytes fuller.

Hustling is undoubtedly what got Birdman and Ross to their current positions. Their music, at least in 2008, is clearly not a strength that they can confidently allude to as a similar strength. They lack discretion on The H, and considering the fact that “Volume 1” is included in the title, this likely won’t be the last compilation of music from the two.