For over five years, there have been reports of a Rick Ross & Birdman collaborative album. The same month that Cash Money Records announced possible plans to revamp the Big Tymers, label co-founder and CEO Birdman has revealed that he is also unearthing the album recorded with Ross—and giving it away for free.

In a May 15 video shot by Derrick G., the two moguls spoke about the “lost album” known as The H. “We recorded it in 2008. That mothafucka’s a classic,” said Birdman. Ross interjected, “We finna get ready to drop it—what is it? Next Thursday.”

Birdman noted that one of both artists’ longtime affiliates is getting the billing on May 23 release. “[DJ] Khaled [is] hosting it,” noted the rapper formerly known as Baby. Ross added, “This a project that me and [Birdman] did, maybe in two or three days.”

According to Birdman, the Miami, Florida recording sessions were a prolific time. “We recorded 40 songs in less than 10 days.” Ross detailed the days between his Trilla album and Deeper Than Rap. “That was 2008. We’d go to the studio, bang out five, six, seven records, then go shoot us some shit, jump in the Rolls Royce and swerve. We did so much music and we’ve just been sitting on it, and when we get together we’ll listen to it and smoke somethin’. Stunna just hit me like, ‘Man, let’s go feed the streets with that.'” The project is endorsed by both Cash Money/Young Money Records, and Maybach Music Group.

Birdman, who was in between his 5 * Stunna album, and 2009’s Priceless said to Ross on the video. “That was a moment in your life, my life, where we just touched the town.”

In 2009, Rick Ross noted to HipHopDX that he and Birdman were at work on a film, The H: “Me and Birdman are executive producing a film by the name of H, so look for that. That’s behind the scenes in production as we speak, and until then, were going to release a couple of short films.” 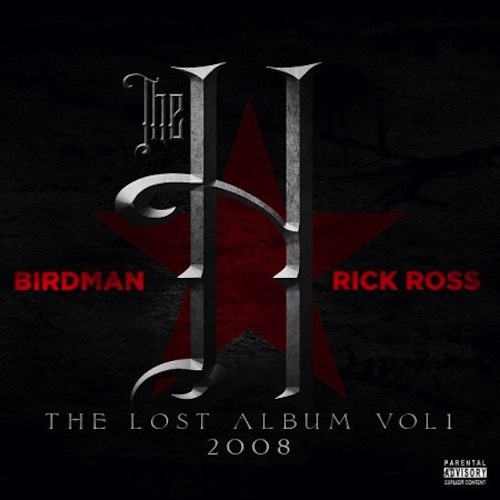 Artwork, shown briefly in the video’s end, indicates the possibilities of additional volumes of The H: The Lost Album.

UPDATE: The tracklist to Birdman & Rick Ross’s The H: The Lost Album, Vol. 1 has been announced and is follows:

UPDATE #2: DatPiff.com has released the downloadable version of Birdman & Rick Ross’ The H: The Lost Album, Vol. 1. The mixtape stream is available below: