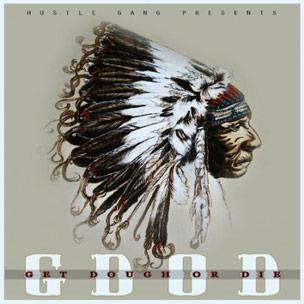 With resilience and personal growth that have fallen under much public scrutiny, T.I.’s transition from the streets to stardom has been rough to say the least. A series of jail sentences coincided with his career’s peak, impeding the progress of his Grand Hustle imprint and its artists looking to their leader for guidance and an assured financial backing. With only the acquisition of B.o.B. proving fruitful, the success of his recent release Trouble Man: Heavy Is The Head and a popular reality show suggest he’s on an upswing again, as T.I. aims to bring his clique back towards the forefront with the renamed Hustle Gang’s G.D.O.D (Get Dough Or Die).

Throwing his hat in the ring to compete with compilations from well received rosters such as G.O.O.D. Music and Rick Ross’ MMG brand, T.I.’s Hustle Gang sets themselves apart from the run of the mill mixape mob with G.D.O.D. The squad proves to be generally captivating, making fully developed songs despite predictable mentions of the fashionable drug molly and the project’s countless boasts of materialistic wealth. Responding to the urgency of their motto’s acronym, most of the heavy lifting is handled by T.I., B.o.B. who cuts loose as a tough spitter outside of his pop lane, and the still razor sharp one hit wonder Young Dro.

Posse cuts such as “Err-Body” and “2 Fucks” give a platform to Hustle Gang’s lesser heard signees and affiliates including UK grime emcee Chip, Shad Da God, Yung Booke, and Doe B. Where Iggy Azalea practically ruins “Chasin Me” with rhyme schemes such as, “Nowadays I’m feeling like fuck a hater’s feelings / ‘Cause they got me fucked up like sex on the ceiling,” the tape’s title track [though borrowing from Lex Luger’s production blueprint] and the trunk rattling “Kemosabe” impressively pick up the slack. Guests include French Montana & Meek Mill on the turned up “Blocka,” Young Jeezy on the summer anthem “Only N Atlanta” and Southern veteran Mystikal on a remake of his classic “Here I Go,” all adding to the tape without taking focus from T.I. and his cronies.

With G.D.O.D., T.I. has ushered in his label’s new regime while setting the stage for his already established acts to continue flourishing. The effort’s weaknesses stem from overkill, as “Problems” runs nearly eight minutes long and “Real Niggas” is full of second string backups who are largely uninteresting. Also, Trae Tha Truth’s numerous smooth appearances are an ill fit given Hustle Gang’s aggressive tone. T.I.’s persistent tough talk rings unbelievable considering his role as a family man on VH1’s “The Family Hustle.” But regardless, he wields a strong command over Hip Hop, shouldering the burden for a team who would otherwise be left to their own devices.