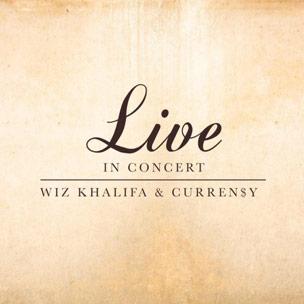 Back in 2009, August 9th to be exact, Curren$y and Wiz Khalifa dropped their collaborative project, How Fly, and their cult followers—The Jets and Taylor Gang respectively—rejoiced. Since then, both have seen their own solo success, and launched their own labels. Live In Concert brings the new age “Doobie Brothers” back together in an attempt to rekindle the magic they found back in 2009. While the project originally ran into roadblocks last year due to sample clearances, fans of the two emcees can finally celebrate the reunion of Spitta and Wiz for an entire project. The question is, was it worth the wait?

Those looking for this project to be How Fly all over again may be in for a letdown for several reasons. For starters, How Fly was released as a free project, with 15 tracks. Live In Concert is a retail EP, with six tracks. It’s safe to assume the price tag is at least in some way connected to the aforementioned sample clearance issues and the pair’s newfound interest in Jazz flutist Bobbi Humphrey. Live In Concert is Jazz-inspired, with samples to match. While the sonic choices are definitely on point, Wiz and Spitta’s performances seem phoned in. Both do a good job of staying on pace with the beat for the little time they spend on each track, but the wordplay Curren$y is known for seems nonexistent, as is Wiz’s sing-songy flow and melodic hooks. It’s seems as if at least half of each track on this six song project is spent listening to the sample. On “Revenge And Cake,” which samples Humphrey’s “Sweeter Than Sugar,” Wiz doesn’t appear on the track until the 1:28 mark. After a 45-second verse, the sample plays until Curren$y arrives at the 2:45 mark for another 45-second verse; you’re left with the sample for the rest of the track. While this isn’t something normally focused on in reviews, with a five-minute track only featuring the emcees for a minute-and-a-half, on a six-track project, you really have to wonder how much effort was put into the making of said project. For the most part, all the songs on the EP fit this mold.

While you only get so much Curren$y on Live In Concert, on “Toast,” which features another Humphrey sample (this time, it’s “Mestizo Eyes”), he displays a little of his talents, with wordplay and car talk for the whip fanatics, rhyming, “Get it done when the time is crunch like sit-ups / To the challenge I rise, Lamborghini doors / ‘85 Countach never seen a real road / From the show room floor, to my seven car garage / Got a storage cross town, with like seven more rides, tucked inside / The Grand Theft Auto life / Rolling up in my safe house, I’m looking down / Done it by my design, refusing to compromise…”

If the goal of Live In Concert was simply to set the mood for April 20th, the sample choices probably accomplished the goal for most. Those looking for How Fly 2, or simply a project showcasing what Khalifa and Curren$y do best are bound to be let down. The two rappers aren’t even present for most of the EP, and when they are, it’s not their best showing.