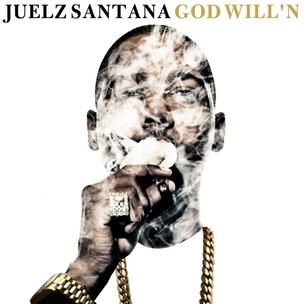 While age in Hip Hop doesn’t necessarily decide the fate of an artist’s success, it certainly doesn’t help to take an extended retreat during arguably your peak years. With 2005 being the last time since Juelz Santana dropped a proper album (sorry, Skull Gang doesn’t count), the Dipset representative is finally on track to release his oft-delayed, much anticipated album Born to Lose, Built to Win. In the meantime, though, it’s only appropriate that the 30-years-young rapper provides a table setter with God Will’n.

Diehard fans of Juelz will be pleased to know that the Harlem native hasn’t lost his ferocity on the microphone, with tracks like “Bad Guy” and the Jahlil Beats-laced “Nobody’s Safe” marking his return with a bullet. Proving he’s up on the latest trends, Juelz playfully handles business on “Blog That” rapping, “I ball even when it’s halftime / Your bitch call, it’s that time / I’m lit like a candle, she tryin’ to get her wax on.” Shifting from the streets to the club, the allure of the aforementioned “Nothing To Me” may be limited, but it will also likely be the entrance song for Roxie and Sapphire by week’s end.

Members of The Diplomats aren’t typically known for their contemplative confessions, yet Juelz pulls this off admirably on “My Will,” even if he does drop a bizarre bar in between (“Put my tongue and my dick in a room with all my bitches / And tell them that it’s going to the highest bidder”). Similarly, the Future-assisted “Nobody Knows” delves into his inner circle struggles with friends over the last few years:

“It’s hard being a real nigga when these niggas got bitch tendencies / Female emotions, I can’t waste my energy / For them I got that remedy, kill ‘em with success / Royalty is my pedigree, too fresh to be stressed / But thank God for memories, God willing I’m blessed / My comeback’s they penalty, these haters gon’ be upset.”

With a guest seemingly around every corner, the task at hand for God Will’n becomes Juelz Santana’s ability to balance their presence with his plan. Co-pilots such as Wiz Khalifa (“Everything Is Good”) and Lloyd Banks (“Turn It Up”) bring a crucial dynamic to the equation, while the collection of artists on “Soft” efficiently feed off each other over an otherwise paltry beat. However, the same can’t be said for tracks like “Both Sides” and “Black Out.” On the latter record, Juelz offers up an impressive performance (“She said bands make her dance, I’m beating drums and blowing horns”), but that is quickly erased with Lil Wayne’s horrendous hook and sluggish vocals. His collaboration with Wale doesn’t fare any better, with meager lines from both parties bringing the song to a creative halt.

The best way to describe Juelz Santana on God Will’n is that he exerts less energy and still scores the same favorable results throughout the mixtape. It’s tough to gauge if he has grown wiser or it’s just his frame of mind at the moment, but regardless, Juelz succeeds with his latest project.