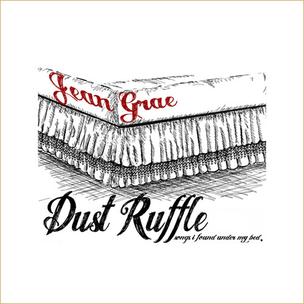 The phoenix known as Jean Grae has blazed her path from obscurity to larger visibility over the past decade; a traditional throwback to when female emcees provided competition on the merits of talent rather than intentionally blatant eye candy. On top of her lyrical gift, affiliations including the Jeanius LP with 9th Wonder and a business alliance with Talib Kweli’s defunct Blacksmith label have elevated her presence amongst supporters anxiously awaiting slowly released output. A selection of rarities to kick off what will be a reportedly productive 2013, Jean Grae has compiled Dust Ruffle as a show of appreciation and an appetizer for what’s to come.

Jean Grae is one of today’s most multi-faceted females in Rap, earning respect equal to her masculine counterparts with songs displaying wit, sex appeal and the ability to wear her heart on her sleeve. Dust Ruffle allows her complexities to flourish, piecing together snapshots of her long running career and taking listeners on a journey through the artistic growth she has undergone. “Neckface” and “What Cha Gonna Do” are hard edged and hyperactive, representative of a style Jean employs far less at present, while the free-spirited “Lights Off” reflects that which has given her a greater and more accessible platform.

Though dated and uneven due to its sporadic recordings from different periods, Dust Ruffle functions as a time capsule and a retrospective of Jean Grae’s topsy-turvy tenure in a business where she has struggled to retain passion. The series of leftovers shows the progress that has taken place and the evolution that went into shaping her modern form, from having fun on “Mean Jean” to the intricate storytelling of “The Setup,” both remaining loyal to her underground core. In sum, this diverse collector’s item further strengthens the case for Jean’s gender being an afterthought to her unconventional music.