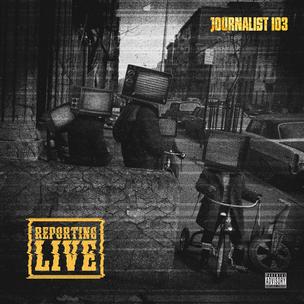 Alongside his fellow Detroit brethren DJ Soko and producer Apollo Brown, Journalist 103 made an unexpected yet impressive introduction with Gas Mask in 2010. Collectively known as The Left, the album captured a nostalgic prestige with Journalist playing an integral part as the mouthpiece of the group’s movement. Two years later and on the solo tip this time around, he looks to carry on this distinct style with his debut Reporting Live.

While Apollo Brown’s backdrop presence is only found here in the form of “Where Is The Love,” Journalist makes do with varying beats from the likes of ATG, Lex Luthorz and Monkodelic to round out the sound. Their overall execution may not match that of Brown, but it’s still an appreciative cast who likewise are able to adapt to the emcee’s needs. Journalist 103 fares better with his shortlist of guests, who present a colorful dynamic to his usually firm delivery. As such, Fashawn (“Hear Me”), Eternia (“Where Is The Love”) and Freeway (“Danger”) act as effective counterbalances, and they’re no slouch with the pen either.

What stands out the most on Reporting Live is Journalist 103’s command on the microphone. From the lyrical vigor and socio-political narrative of “United We Stand” to the melancholic disclosure of drug addiction within his family on “3 AM,” there’s magnetic conviction in Journalist’s voice. Bringing clarity to his personal journey, “Walk With Me” is a record filled with anecdotal teachings for navigating life. Over throbbing drums and a rich melody he raps, “And no, it ain’t all good / Truth will always stand clear from the falsehood / Witness corruption, but know that there’s still hope / Ease comes with hardship so you’ll have a full scope.”

Regardless of how professional an individual is, no live broadcast is without an error or three. The same can be said for Reporting Live, where brevity limits the extent of a handful of tracks’ significance (“Arson,” “Moving 2 Fast”) to which they feel unfinished. Then there’s a record like “The System.” Channeling shades of Lupe Fiasco’s “Words I Never Said,” Journalist merely rattles off a plethora of social ills throughout the world. However, in no instance does he suggest or enlighten his listeners with an alternative solution. Exploitation is exploitation, even if intentions are sincere.

Journalist 103 stands to be a vital force for the unheard, and Reporting Live solidifies him as such. With this album and Gas Mask held in succession, it’s clear that Journalist has found his rightful place within Hip Hop. It may not be glossy and glorified by the masses, but it’s music with an honest cause, and that should keep him above the fold.