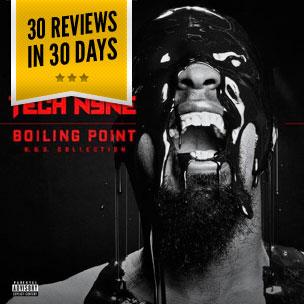 Tech N9ne is angry. Scrap that: Tech N9ne is exceptionally angry. His latest EP opens with the abrasive demand to “Shut the fuck up!” and the Kansas City firecracker continues to blaze through seven tracks that, closing cut aside, channel his pent-up fury into irate Rap missives. When he hits form, Tech comes off like an undeniable force of Rap. Curiously though, Boiling Point doesn’t manage to mould this intensity and tangible rage into quite the fireball of an EP it should be.

For his part, Tech’s verbals can be as spellbinding as ever. “URALYA” does the job as an opener, with the production’s gutsy guitar stabs trading blows with threats like, “I’m gonna beat you like a piñata/ Better yet I’m giving the devil a stigmata/ Hit you with a hell of an Afrika Bambaataa – boom!” Then comes “Fire In AC,” which has Tech and Krizz Kaliko addressing the cinema shooting in Aurora, Colorado over a dramatic and bombastic beat by Seven. “I wish this would have happened like it happened in my mind,” raps Tech, “Instead of what occurred in theater number nine/ My condolences to the families that mourn/ Our humanity was torn.” Cinema shooter James Holmes is then told to “Burn in hell for eternity for what you did… The depths of hell gonna swallow your ass.”

But as the EP continues, and the demonic indignation increases – not least with the murder fantasy “Should I Killer” and the Brotha Lynch Hung team-up “Hunger” – it reaches a plateau: The inherent evilness of the lyrics becomes so the norm that there’s no shock or edge or thrill to them anymore. When Tech spits “‘Cause you a bitch/ You a fraud/ I don’t like you/ You a broad” he sounds like he’s running out of ideas. This is compounded by Tech’s flows across Boiling Point veering towards the one-dimensional.

2012 has seen Tech N9ne abide by an intense and hectic release schedule for both his own output and his label. Now he might want to cool down on the wrath and start to remember the benefits of a bout of calm reflection.