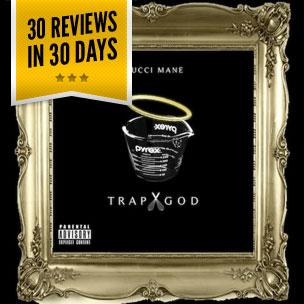 As boastful as the title Trap God is, it’s evident that Gucci Mane’s loyalties reside in the streets, a dynamic that will never change. Likewise, what also hasn’t changed is his inability to grow as an artist, with his latest mixtape sticking to an exhaustive routine of drugs and dollar signs.

If there were any reason to praise Trap God, it would come by way of Gucci’s collaborators. “That’s That” is a catchy, upbeat cut courtesy of Kevin McCall, while “Crazy” displays a surprisingly focused Waka Flocka Flame and Drumma Boy’s menacing production. With 808 Mafia suitably simulating Lex Luger’s sound, “Get Money Nigga” is the closest the project gets to solid execution as Meek Mill spearheads the record with his animated delivery. In retrospect, this is a similar formula utilized on his last mixtape I’m Up, which featured a Rap-stacked deck to masked Gucci Mane’s weaknesses.

At 20 tracks, the listener is either burdened with the grueling task of getting through a disparaging collection of audible carelessness, or skipping nearly half the project to find something worthwhile. Underscored by a lethargic demeanor, “Shooter” feebly attempts to build on a concept that is generously overplayed. Also, it’s safe to say no one is intimidated when Gucci Mane warns he’s going to “Waka Flocka Flame a nigga.” Interchangeable records like “Dead Man” and “Act Up” bring little to the conversation from a depth standpoint, and “Baby Wipes” plays on a ludicrous metaphor that even Gucci has to be aware of. Needless to say, the question of Gucci’s validity as an emcee should immediately be dismissed with his performance on “Fawk Something” (“Yeah my diamonds dancing, my dick taste just like candy / I’m cooking dope in Burberry because I’m kind of fancy”).

Gucci Mane recently stated that he plans on being holed up in the studio for the next few months to work on new material. Whether that involves a look in the mirror and a lyrical spark on the microphone is something we’ll end up discovering when the time comes. After Trap God though, the only direction he can go is up.