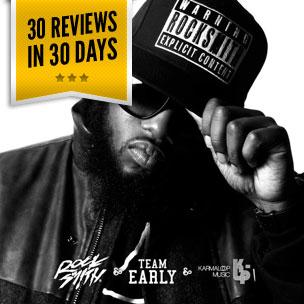 Though Freeway may be busy releasing news about his upcoming album Diamond In The Ruff, due late November, the Philadelphia emcee gives his fans an appetizer before the main course in the form of his latest mixtape Freedom of Speech. The sixteen track free offering has minimal features and a varying production lineup, giving Freeway the chance to show off over a dynamic musical backdrop. Emphasis on the word chance though, because Freeway definitely took some chances. But did they all pay off?

Freedom of Speech’s biggest fault lies within the imbalance of production vs. rhymes. Free can switch up his subject matter from tough street shit (“Real Shit” featuring former Roc partner in rhyme and fellow Philadelphian Young Chris) to love (“Ghetto Love” featuring Free) and maintain a steady flow and some convincing bars, but some of the middle ground gets awkward. “Workout,” produced by B. Jones, boasts a strip club-ready twerk beat, while Freeway hops on the hook spitting “treadmill, elliptical, bicycle, lets get physical,” which is hardly a Freeway line anyone would want to remember. The JRB-produced “We Up” almost has a “lean music” sound, as if it was just a little bit of chopping and screwing away from a purple hue. The song isn’t overtly bad, but Free’s trademark raspy voice begins to work against him as the track is so smoothed out that his abrasive vocal tone on the verses makes the song audibly confusing.

Philly Freezer sounds most comfortable when the beat and the topic at hand run parallel to the natural aggressiveness that his voice commands, as exemplified on the title track of sorts, “F.O.S.” featuring Mama Jones. The bearded rapper rhymes, “been a rapper, I broke the mold/ played the game right, never broke the code/OJ Simpson, yeah I had that white on an open road/ alphabet soup nigga, O’s and O’s.” The standout transitions right into one of the tape’s other stronger offerings, “Hotline,” but Freedom of Speech struggles at maintaining its initial momentum.

If more of the “Ice Cream” cuts could have been replaced with more “Go Get It” songs, Freedom of Speech would be more of a solid offering. Instead it seems like Freeway was experimenting with the trendy sounds of the present to see how the end result would turn out. The verdict? A valiant effort, but Free’s consistency is what makes him great, not working with what’s currently hot. Here’s to anticipating more traditional Freeway once Diamond In the Ruff rolls around.

Listen to Freedom Of Speech by Freeway