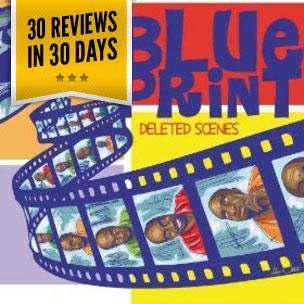 Blueprint is a seasoned musical time traveler. His 1988 album years ago set the flux capacitor perfectly on one of Hip Hop’s richest years. More recently, his Adventures In Counter-Culture held nostalgia against the future with revelations, stories and expressions looking at social misfits. From those sessions leading up to last year’s album, ‘Printmatic had more to say on such a thematic release. Deleted Scenes shares some concept from the high-profile 2011 Rhymesayers release, however the jigsaw puzzle pieces take on a life of their own, and prove that this anachronism is also a skilled editor.

“The American Dream,” a single from Deleted Scenes is one of its most profound moments. The song looks back to the innocence of Blueprint’s youth. Told through the adolescent images of compact cars, expensive clothes and rival schoolgirls, the two verses highlight work-ethic and cheap fun as a lost pastime. Simpler times, as heard on A.I.C.C.’s “Stole Our Yesterday” are a driving force of inspiration in Blueprint’s art as of late. Another similar quality between the two albums is ‘Print’s artistic experimentation, although the directions vary. Album-closer “Packt Like” (a remake of Radiohead’s “Packt Like Sardines In a Crushed Tin Box”) is full-on singing, with a repetitive, simple chorus of “I’m always lookin’ in the wrong place / Get off my case.” It’s unclear who or what the artist is speaking to, but it’s a long way from even the emcee’s melodic delivery heard on Soul Position’s Unlimited EP. With warm vocal tones, the Columbus, Ohio native proves that he’s got tremendous vocal range and could succeed outside of the 16-bar Rap format. Fans of the more traditional style will find comfort in tracks like “Takin’ It,” where the wordplay states: “On the campuses, they’re like, ‘You’re my boy, Blu’ / ‘Cause everything about his habitat is old school / Before you challenge him, think twice before you choose / Whatever happens after that is on you.”

From a musical standpoint, Deleted Scenes feels less cohesive. “Bartenders” is fuzzy synths and golden-era drum programming, just a song behind the isolated piano of “The Mask.” New Wave, Jazz and Electronic are active elements in the kit, as expected, but like deleted scenes in a film, they’re harder to sequence than the album whose sessions they evolved from. Blueprint continues to challenge his range as an accomplished producer, versed in both sampling and instrumentation. However, as someone so associated with complete concept, Deleted Scenes’ backdrops are challenging.

At a time when Hip Hop artists are easily driven to sequels and revisiting successful traits in their repertoire, Blueprint’s Deleted Scenes has less to do with Adventures In Counter-Culture than it may seem. This is an album of its own after being presented, although the back-story overtly connects it to its predecessor. Instead, it almost appears as if two albums were recorded in 2010 and 2011. This effort is more a la carte, but still finds an artist who thrives in storytelling, tangible emotions and dynamic production. Past the decade mark in an energetic and evolving career, this time-traveler makes appropriate music for these days and times.