Murs and Fashawn - This Generation 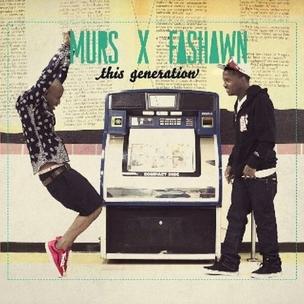 While a past history as collaborators has been non-existent for left coast rappers Murs and Fashawn, eventually seeing them coalesce made sense considering their close quarters and likewise associates. With Murs playing the grizzled vet and Fashawn the lyrical wunderkind, This Generation thrives in its approach to bridge the gap for two emcees that represent a pragmatic attitude, with anecdotes of love and paper chasing stuffed in between.

This Generation appropriately carries a City of Angels theme with tracks like “64’ Impala” and “Reina De Barrio (Ghetto Queen)” lending a radiant climate. It also doesn’t hurt that full production is handled by K-Salaam & Beatnick, whose intrinsic expertise is worth its weight in gold. Take for instance “Yellow Tape,” where hollow drums and a seamy melody create a mischievous setting. Then on “Peace Treaty,” K-Salaam & Beatnick lock down a funky backdrop that would make DJ Quik proud. With an overload of synth, “Future Love” is more experimental as Murs and Fashawn pine for their past flames. Slower in tempo, the track loses a bit of traction that’s established early on, but it’s one of only a few records that miss the mark. With each track averaging in at the three and a half minute mark, there’s very little room for frills or features as Murs and Fashawn focus their collective efforts on formulating records with purpose, such as “And It Goes.” Over a melancholic beat, the two lament on the trials of street life.

“Heartbreaks & Handcuffs” delivers a more hopeful message. Providing words of societal insight for the youth, Murs raps, “I dream to make a better day / Making music, saying things that they would never say / I come from the same hood with no hope / But never use that excuse to slang dope” while Fashawn’s verse examines the absence of governmental involvement within the inner city. Match thought-provoking material like that alongside lyrical acrobatics (“Slash Gordon”) and an occasional loose-witted cut (“The Other Side”) and This Generation is a well-balanced project that covers all the relevant topics.

Murs and Fashawn forge an exceptional chemistry on This Generation that more importantly doesn’t compromise their stylistic individuality. Though Murs has been a fairly successful partner to other artist collaborations (specifically Slug of Atmosphere and 9th Wonder), his kinship here with Fashawn is one that should work as a celebrated launching pad for both emcees, and hopefully will stand as a first project of many we’ll hear in the future.