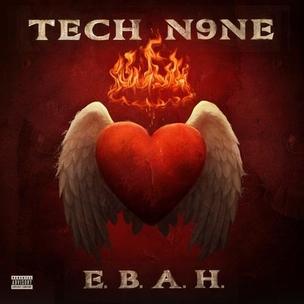 Missy Elliott may be teasing that her upcoming Block Party album is going to usher in a new wave of “Theatrical Hip Hop,” but with E.B.A.H., Tech N9ne may have already stolen her thunder. At seven tracks long (plus a few skits) it’s a concentrated listen, but it’s one that amps up the sonic drama and vocal intensity to levels of entertaining insanity. Call it a theatrical ride through Tech’s mind.

Breaking down as “Evil Brain, Angel Heart,” the title track “E.B.A.H.” jolts the EP into perky life with marching-style drums setting the pace for Tech’s furious-as-ever vocals. Embracing the title’s theme, he drops the warning, “Take me light and my darkness will take your breath time,” before adding context to the sentiment with the plea, “Liberate me lord, I’m an angel/ And on this wicked planet nobody understand my angle is love/ I was sent from above, but I’ve landed in blood/ Psycho-bandit I’ve become.” Throw in some vicious scratches on the hook and it’s a raging opener.

Then come the (smart) brakes: It’s followed by “Earregular,” a stripped-down, eerie and warped song that has Tech spitting stream-of-conscious musings while he’s slouched down “listening to Doors records while I get groupie whores naked.” This duality of tones continues throughout the EP, with the rowdy “Rock Yo Head” (featuring the 816 Boyz) and ruggedly funky “Boy Toy” pitched against the woozy Krizz Kaliko “KJOMD” and elegiac closer “A Real 1.” This balance imbues the EP with its intrigue.

In these times of sprawling freebie mixtapes and albums with five throwaway bonus songs tacked on to the end, Tech N9ne has crafted that rare thing: A focused body of work that actually sounds like the artist has put some thought into how their art and message should be presented to the world. Sure, E.B.A.H. might not be the most expansive thing Tech has ever attempted, but it’s an on-point and fiery batch of tracks to tide you over until Boiling Points drops.