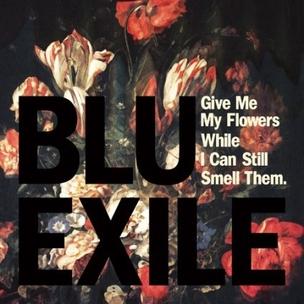 One balmy afternoon back in the mid-to-late-’90s, Q-Tip likely lost a beat tape he was hawking around. This probably happened while he was on his way over to his new pal Jay Dee’s house, wherein the two would sit around, sip chamomile tea and grumble about Phife’s contribution to A Tribe Called Quest’s faltering output. Tip and Dilla would do this while listening to a soundtrack of their own making: clipped beats, noodling jazz-style piano lines, and a vibe you might kindly call “coffee-shop-nausea.” Somewhere along the line though, it seems that this mythical beat tape fell into the hands of Blu and Exile, who’ve used that formula to cut an album more likely to cause narcoleptic head nodding with lofty hopes of cerebral introspection.

Opener, “A Letter,” sets the tone of Give Me Flowers While I Can Still Smell Them – or G.M.F.W.I.C.S.S.T. as the hip kids on the message boards are most definitely calling it – and it’s one the 17-track project never recovers from. The listening experience is laid back and cosy, but it never sparks into life like the greater whole of the “experimental” Hip Hop catalog Blu has provided in recent years. By the time you’ve hit “Ease Your Mind” (another mid-tempo, broadly jazzy production) and “Maybe One Day” (yup, another dose of Blu’s daily witticisms about the evils of money), the only expectation drummed up is that somewhere, at some point in the album, something ear-rattling surely must happen. But it doesn’t. Instead, the songs are content to meander on, unaware of the peaks and valleys that imbue an album with its momentum.

As the closing track, “Cent From Heaven,” winds up, you’re left with the impression that Blu and Exile have largely spent the recording process treading water. For the Blu and Exile aficionado, this is all both expected and welcomed. However, for the occasional ambient Rap fan, there’s nothing to startle about the music or the lyrics and there’s little that isn’t coated with a whiff of having heard it all before. Blu and Exile are without doubt a couple of super-talented Rap chaps, but they need to step out of their snug comfort zone – and sharply.