Maybach Music Group - Self Made Vol. 2 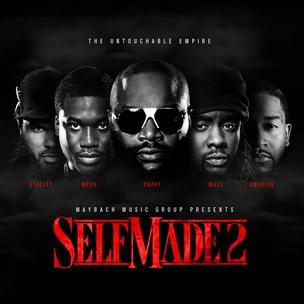 “If Michael Jackson came alive right now, he’d ask you to smoke one for him. So in his honor [puffs].”

Rick Ross utters those words as an introduction to Self Made Vol. 2, which probably ascribes undue importance to the album, but perfectly exemplifies Rick Ross’ style. MMG’s head honcho has made it clear: boasts and boats, Beamers and Benzes—these are the things that make Rick Ross’ personality even bigger than his ample frame. Interestingly, though, Rick Ross has proven that there’s more to him than meets the eye (and ear) via his executive decisions. While Meek Mill falls in line with Ross’ aesthetic, D.C. native Wale and Ohioan Stalley decidedly do not. In all, Rick Ross has assembled an interesting collective, and accordingly gets interesting results.

“Power Circle” seems at first glance to be a challenging introduction, coming in at a cumbersome eight-plus minutes, but it’s actually a pretty smooth listen. The quintessential posse cut, Gunplay, Stalley, Wale, Meek Mill and Rick Ross give their varying takes on success. What’s particularly interesting is that it’s not a uniform discussion from each artist. For examle, Stalley, who has yet to release a debut album, explains how he is one of the few to escape the conditions of his community; he’s not too far from those humble beginnings, and it’s appropriate for him to address them as such. Wale, on the other hand, is onto a different level of self-reflection, afforded to him by his having been in the game for a number of years. Throw in understated but triumphant production and a Kendrick Lamar guest spot, and “Power Circle” is everything that’s right about MMG.

“Black Magic” is on the opposite end of the spectrum, as producer Young Shun completely jacks the Ace Hood/Lex Luger “Hustle Hard” sound, which is quickly becoming its own narrow, horrible genre of repetitive banality these days. “This Thing of Ours” is markedly better, with moody, lush production that once again gives the artists room to bring their own style and rhetoric to the table. Rick Ross doles out his boss-talk, with reflection focusing on his rise to success, while Wale wonders about Hip Hop standards and the absolute inordinate amount of hate that comes his way. Nas assists with a slick verse—he’s rediscovered top form as of late—and MMG newcomer Omarion provides a smooth hook to boot.

Perhaps the presence of French Montana is what make both “All Birds” and “Actin Up” so unimpressive (it certainly doesn’t help), but neither cut advances the album’s cause, and finds MMG falling back into its worst tendencies. The same can be said of “I Be Puttin’ On,” and suddenly the project is dragging in halfway through. Still, Rick Ross does some heave lifting on “The Zenith” and “Fountain of Youth,” which play to his aesthetic, but still offer a trace of nuance that makes his subject matter much more interesting: “My nigga did a dime, didn’t learn a thing from it / Came home, in two weeks, got him a 600 / Get a text from the boss, you know them bricks comin’ / Chicks at the beach house like they gon’ miss somethin’ /  From the trenches I rose, only lovin the dough / …Smokin’ the truth, that’s my fountain of youth.” Other than “Let’s Talk,” which makes a lazy, hollow use of a Notorious B.I.G. vocal sample, the album closes quite nicely, with minimal speed bumps.

Self Made Vol. 2 is a noted improvement from its predecessor. Aside from Rick Ross’ innate ability to choose great production and guest features, the project features Ross’ vision for his Maybach Music Group squad: a diverse collection of individuals whose differences are complimentary. If the crew can manage to keep from occasionally lapsing into predictability, it’ll be a force to be reckoned with for quite some time.