Oddisee - People Hear What They See 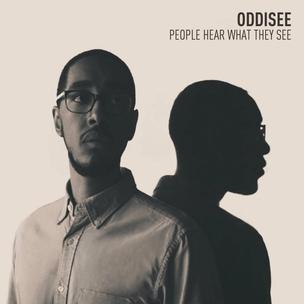 With Hip Hop’s beginnings stemming from a “do-it-yourself” mentality that unified disenfranchised youth in the Bronx, this same approach has extended to entrepreneurial business meeting the need for creativity in modern times. In particular, the advent of technological resources including the Internet (social media and digital retailers such as iTunes and Bandcamp) and ProTools sessions have made it possible for artists to reach fans and even collaborate from separate studios in ways previously impossible. Producer/MC Oddisee is a lead benefactor of such efficiency, hailing from Prince George’s County (neighboring the nation’s capital Washington DC), using everything at his disposal to shift music in a soulful and mature direction for the past decade. People Hear What They See is his eagerly anticipated debut solo album, a culmination of many instrumental projects and smaller efforts teasing his full potential.

As one of the present culture’s most accomplished acts on the international touring circuit, Oddisee’s first album reflects experience gained from an expansive worldview that is equally personal and universal. Technically still a product of Hip Hop as his long established penchant for fierce rapping accompanied by boom-bap rhythm is fully intact, his gradual growth towards a fleshed out vision inclusive of live instrumentation may seek transcendence that dispels confinement within a set genre.

Topically, the album covers an array of serious matters as Oddisee joins forces with his partners XO and yU (the three comprising the group Diamond District) on “Do It All” breaking down their empowered determination towards career survival while “Let It Go” and “That Real” (both inspired by ’70s Soul and Funk) respectively cover withstanding stress and simultaneously balancing the need for commerce with staying true to his craft. Proving himself capable of occupying numerous lanes, the relationship themed “The Need Superficial” and “Thinking Maybes” are handled with the same grace as a response to the country’s economic crisis on “American Greed” and “Set You Free” which takes materialism and similar societal traps to task. Ending things on a personal note, “You Know Who You Are” is a series of open letters to unnamed friends turned foes and supporters and the finale “Think Of Things” is an introspective piece highlighted by beautiful strings and synths celebrating how far he’s come in hopes of further strides.

Oddisee remains one of the underground’s most thriving self-starters, a brilliantly independent idealist who goes against the grain in a manner that is relatable to serious Hip Hop enthusiasts. People See What They Hear is a gimmick free journey through his mind, as he speaks to concerns that are in perfect synch with aging listeners gravely concerned for what they perceive to be the wilted shape, form and feeling of a once vibrant urban movement.