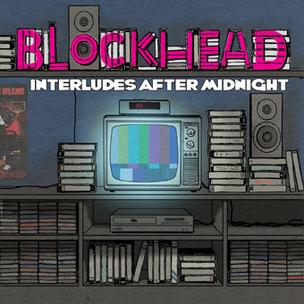 There aren’t many Hip Hop producers that create what can really truly be considered albums. Blockhead joined the small, exclusive club of “Hip Hop composers” when he recorded 2004’s Music by Cavelight after making a name for himself producing for Aesop Rock and a slew of other artists. Each album since has carried with it a distinct aesthetic. Blockhead’s latest, Interludes After Midnight, is no different in that it is something entirely different.

On “Never Forget Your Token,” the album’s opener, a vocal sample from Psychedelic Rock group The Loose Enz implores the listener, “buy yourself an underground ticket / take the subway to the end of your mind” on the album’s opener. In typical Blockhead fashion, the song builds as various elements are introduced and removed at different junctures. By the time an electric guitar hits the listeners headphones, the original track is unrecognizable until the aforementioned vocal sample is reintroduced, providing a satisfying feeling of resolution. “Escape the Meadow” is another good example of this technique, as bass strums and subtle vocal notes punctuate the track a quarter of the way through, only to be replaced by keys and a distant triangle (or telephone ring—it’s really anyone’s guess).

For Interludes, Blockhead drew inspiration from a public access television show. This is fitting, because this album plays out as an auditory corollary to late-night programming, an experience perhaps twisted by insomnia or something of the sort. “Hungover Like Whoa,” for example, is introduced by a sample from (presumably) a workout video, but it’s warped to the point where the cheery disposition of a Jane Fonda-type sounds a bit sadistic and unsettling. “Meet You At Tower Records” may as well be a record store meet, as Blockhead samples both OutKast and German prog rock band Nektar. “Tools of the Industry” can only be described as some odd robot disco, and “Panic In Funkytown” is simultaneously jazzy and erratic. “The Robin Byrd Era” serves as the (comparatively) cheery closer to Interludes; if the prior eleven tracks were a trip though odd late-night TV, this one is waking up in the morning on the couch with the sun peeking through the windows.

Interludes After Midnight is a bit of a surprise in that it doesn’t sound quite as polished as The Music Scene, but that’s not really a complaint—it’s just a different aesthetic choice. If anything, it’s an affirmation that Blockhead rarely gives the listener what they expect. As is the case with each of his releases, the style is unmistakably Blockhead, yet each project manages to distinguish itself from the last. A trend that has continued, however, is that Blockhead has made his music more complex and thought-provoking with each release. As such, it’d be a mistake to disregard this album, or any of his others, as something to simply zone out to. While other producers release “instrumental albums” that are little more than beat tapes, Blockhead provides a soundtrack for the listener’s thoughts, regardless of how actively engaged they are.

The veteran rapper is still nice with it.

An Eminem diss can't save this one.

He doesn’t quite get the block hot, more like lukewarm.

The Kanye West protégé has gone above and beyond expectations with this release.