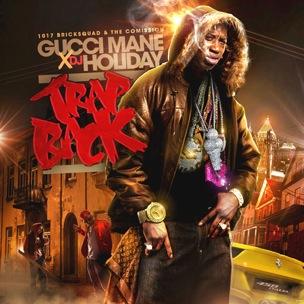 Here are some awesome facts about Gucci Mane that you can learn from the songs on his latest mixtape, “Trap Back:” He’s currently considering moving his bed into his kitchen (“Chicken Room”); he doesn’t like using his bank card, instead preferring to use his “Face Card”

(which presumably means he’s gotten his Visa card number and expiry date tattooed on his cheek); and he absolutely does not like egg-nog (“North Pole”

). With one canny eye on the upcoming Valentine’s Day, he also reveals on “Brick Fair” that he’s really upset that he’s going to “die a bachelor” (moving that bed into the kitchen might have something to do with this one). So, then, a fantastically ridiculous series of rapped factoids. Unfortunately – and you knew there was a kicker coming – the 19 tracks that make up “Trap Back” fail to entertain like those isolated lyrics. Instead, the project reinforces the limits of Gucci’s trap rap spiel and leaves the suspicion that his popularity has already peaked.

At his best, Gucci cuts something of a ridiculous rap figure – this buffoonish persona is a virtue when he’s dropping over-the-top crack rap boasts and flaunting his wealth. So when he spits over a sample of the Tetris theme song on the 2Chainz-featured “Get It Back,”

his lines hit home at their cartoonish best; there’s a marriage of light-heartedness between the beat and the words. But elsewhere the production errs on the wannabe menacing side, which only serves to highlight the limits of Gucci’s raps and has him babbling on like Mike Jones’s more famous cousin.

While his one-time foe Young Jeezy has elevated his trap rap template to stadium status, Gucci’s music stays hovering unsatisfactorily between the street and star levels. Sure, “Trap Back” is a free mixtape and it’s more palatable than his maligned hook-up with V-Nasty, “BAYTL” – but it far from heralds the rejuvenation of Gucci.

Listen to Gucci Mane – Trap Back