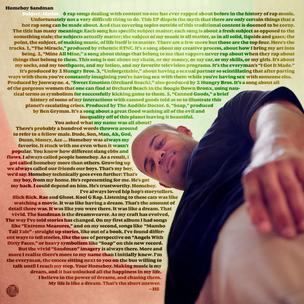 In the evolution of Homeboy Sandman, 2010 witnessed the Queens, New York emcee ascend from a must-see local live act to a proven studio artist with breakaway album, The Good Sun. A perfectionist with intricate globally-reactive songwriting, the last year saw limited material from HBS. However after inking a deal with independent Hip Hop mainstay Stones Throw Records, the AOK member snuck out a digital/vinyl EP in Subject:Matter that alludes to evolving sounds with his remarkable signature writing style.

“Mine All Mine” could pass for a Good Sun hold-out. The litany of things the emcee shares about his possessions (thus the title) are padded with clever wordplay, a nonchalant humming chorus and an intense timed delivery unlike no other. However, the difference is, HBS does not sound angry at all – but he definitely implements cursing and attitude different than what has drawn comparisons to classic PG-Rated Rap records. Just as heard on Midnight Marauders and De La Soul Is Dead, the emcee shows that he’s not to be mistaken for hippie-rap based on some of his past subject matters, “My lips don’t flap / My flames ain’t fake / Ain’t no implants or Nip Tuck fat / My idea of success isn’t buck stacked / My right hand’s on my nut-sack / My left hand’s on my nut-sack, fuck dat!”

Moreover, the stream of consciousness where HBS lists his apartment number, his social causes, the condition of his record collection and more calls back to label-mate MF DOOM, who shared that gift of eloquently making quoted verses from the mundane parts of life. The emcee also knows when to shift his focus from delivery to more traditional content. “Unforgettable” is an ode to an ex that admits that the physical attraction still burns strong during sex with a new partner. On a slow loop-driven beat by Jonwayne, the emcee still rhymes candidly about things when he says, “You went nuts for my nut,” but provides the cadence and ad-libs that have helped drive his tracks for the last half-decade. The emcee succeeded in his mission to pursue frontier subject-matter. This isn’t a concept EP as much as a stop along the way of HBS’s journey to refresh the art of mastering the ceremony.

The EP uses some previous HBS producers like 2 Hungry Bros. and Audible Doctor, and does not use Stone Throw’s acclaimed roster of sound-providers like Madlib, Oh No and Peanut Butter Wolf. “Soap,” produced by previous partner Ben Grymm has an Electronic base that taps into the sort of soundscapes used by “swag” Rap peers. “The Miracle” has an up-beat tempo courtesy of rthentic that sounds like bugged-out Jazz, perfect for an emcee who takes sudden turns on a track. This also pulls from DOOM, but more from the producer than the masked emcee. Overall the six tracks have little in common, yet are honed by the man who raps over them.

Subject:Matter is about new elements in the Rap conversation. Giving himself a framework of talking about the untouched, Homeboy Sandman achieves his goal with an effortless-seeming ability. Moreover, HBS keeps one foot in the magic of The Good Sun, and through a new attitude and new sounds alludes to the direction he’s heading in with his next full-length. For anybody who’s ever considered Rap cliche or walked away believing all has possibly been said, this is one emcee whose writing and candor is trailblazing the conversation.