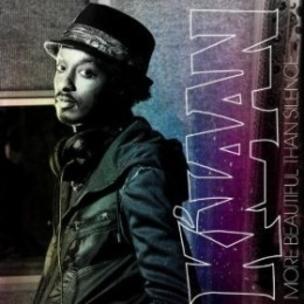 In a mainstream rap landscape where crime bosses like Frank White and Larry Hoover are idolized, and success is defined by the requisite amount of imported cars and “model broads,” a rapper like K’Naan is an anomaly. He’s laser-focused on dreams, peace, and unity for the greater good. He’s already made a global impact, as his biggest song-to-date, “Wavin’ Flag,”

became the official anthem of the 2010 FIFA World Cup. Some may classify him bubblegum pop at first listen, but his message is anything but carefree. K’Naan bypasses the usual rap fare of gun toting and dope games. Instead, the AK’s he rhymes about are the ones used in a decades-old Somali war. He urges fans to get involved and donate money to benefit Somali children. For this reason, K’Naan’s five-track EP, More Beautiful Than Silence, is one of the year’s most authentic rap collections. Each track sounds completely different from the last, and although the record could be a pop smash, his message is never diluted in the melody.

More Beautiful Than Silence starts out with the Nelly Furtado-assisted track, “Is Anybody Out There?”

The folk songbird emerges for K’Naan’s motivational anthem that will rest easily atop the pop charts. The track is a series of tales, similar to TLC’s “Waterfalls.” Mary suffers from depression. Adam is addicted to drugs. One need not visit a struggling nation to encounter these issues, because they’re in their own living rooms. K’Naan gets upbeat on “Nothing To Lose,”

for some lyrical play with Nas.The two take listeners on a journey back to the very different blocks where they were raised. K’Naan talks pirates, and Nas talks about Queensbridge’s Vernon Blvd. Amidst the light-hearted bravado, K’Naan is sure to keep boundless dreams the main topic of discussion: “Roll dice to bet on dreams, not dollars.”

He samples Coldplay’s “Lost” on the introverted track, “Better.” Again, where most rappers tend to rap from Goliath’s perspective, K’Naan’s assumes David’s point of view. The underdog will slay the giant, with a steady noble come-up: “Music is my ammo, I’m ready for battle.” The music becomes melancholy on the title track. The haunting lullaby shows K’Naan releasing his demons, as violins, piano keys, and a choir fill the space until the song fades to black.

The final track, “Coming To America,” would seem to be the best moment for light-hearted fare, since it samples the music from the opening scene of Eddie Murphy’s cult-classic film. But it’s surprisingly the darkest of the entire EP with K’Naan expressing, “I ain’t Prince of Zamunda. My life is too gory.” Even though he rhymes about fleeing warfare and poverty, there’s something calming about the track, in that there’s light at the end of a dark tunnel.

K’Naan packs creative melodies, poetic storytelling, and soaring dreams on More Beautiful Than Silence. Core fans will love this musical appetizer, but one can only imagine the impact of his next full-length project. He’s carved a place in mainstream Hip-Hop for message music and validates the comparison to one of rock’s storytellers, Bob Dylan. Since K’Naan’s mission is to inspire global change, he’ll welcome mainstream success; if it gets his message to the ears of more listeners, and encourages them to dream big.