Saigon - Warning Shots 3: One Foot In The Grave (Mixtape Review) 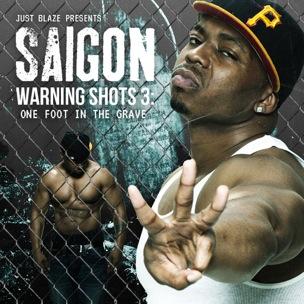 Last February, Saigon must have taken the biggest sigh of relief when The Greatest Story Never Told finally hit store shelves. The release not only showcased his skills on a larger scale, but it also allowed him to focus on future music rather than worry about an album stuck in purgatory. With this chapter behind him, Sai-Giddy shows no signs of a lyrical hangover on “Warning Shots 3: One Foot In The Grave.”

The man known to elicit candid street anthems like “Let A Nigga Know” and “Stocking Cap” in his earlier years reignites this demeanor throughout his latest project, sounding more focused than ever. Over bruising production on “I Am 4 Real,”

Saigon goes in on the soft “cookies” currently populating the airwaves (“Call you that ‘cause you sweeter than a wheat thin / Howlin’ like a wolf nigga, we can see the sheeps then”), while “Hungry”

lives up to its title with a flurry of rapacious rhymes. As if that wasn’t enough, Lil Fame grabs the fierce assist on “Another Man Down,”

a track that brandishes two middle fingers and a cocked pistol as its mission statement.

The vacancy left on “Warning Shots 3” for any Just Blaze-produced cuts (aside from the year-old “Bring Me Down Pt. 3”

) is a baffling letdown given their chemistry on The Greatest Story Never Told. With that said, producers like Sire and DJ Corbett step in with a handful of commendable beats that keep Saigon on the fast track to success. Also notable is the inclusion of close affiliate/friend Scram Jones, who comes through with a heater in “War And Chaos.” Raw, hostile, yet flawless in execution, the record is two and a half minutes of pure corner adrenaline as Saigon graphically outlines the realities of street life. Previously meant for the debut album (as “War”) prior to its various changes from 2007 to 2011, it’s a wonder why “War And Chaos” got the leftovers treatment.

The quality throughout the project is for the most part well-rounded; however, a few records in the middle leave much to be desired. “Come Again 2012” is a nice nostalgic moment for longtime listeners, but it doesn’t go any further than that. “Cutdabullshit, Cutdabullshit” exposes a dip in lyricism (“A lot of ya’ll vagina, acting like ding-a-ling”) and a repetitive tagline hook that wears out by songs end. Then on “When Did U Get Hot,” an oddly distorted guitar backdrop gives way to Saigon demoralizing women who think they’re all that and a bag of onion and garlic. Whether or not the record is sincere in approach, the inclusion is questionable at best.

“Warning Shots 3: One Foot In The Grave” is a clear upgrade from its predecessor in the series, and it likewise displays Saigon’s staunch ability to feed the streets without the preservatives. Saigon’s publicly made it clear that he plans to release music at a more frequent pace now that The Greatest Story Never Told is in the rear view mirror. If “Warning Shots 3” is an indication of where he’s taking us, we’ll gladly follow him six feet under.

Listen to Saigon – Warning Shots 3: One Foot In The Grave